John apparently not in Beantown 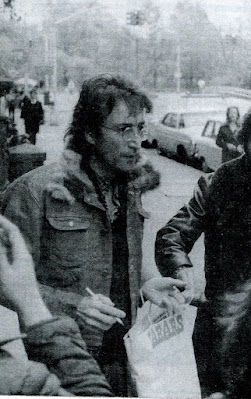 September 17, 1976 -  Boston, MA
Something in late 1976 at the Dakota
Why my confusion on this photo:   I found this photo in a 1976 issue of Beatles Unlimited.  Included with two John photos (one posted here) was a story about fans meeting John in 1976 in Boston.  I started typing up the story and then thought, "this sounds really, really familiar.  I wonder if I already have it on the site."  Sure enough -- I did.   The story originally appeared in With a Little Help From My Friends without any photos included.    So I just jumped to the assumption that this photo was from Boston.  Why else would it be in the middle of a story about John in Boston, right?  Well -- I should have looked closer for sure because you all are right --- John is outside of the Dakota.   Ooops!
Here is the story from Boston if you are interested.
http://www.meetthebeatlesforreal.com/2014/05/i-am-boston-walrus.html
Posted by Sara S. at 8:20 PM