The Night I Grabbed Paul McCartney 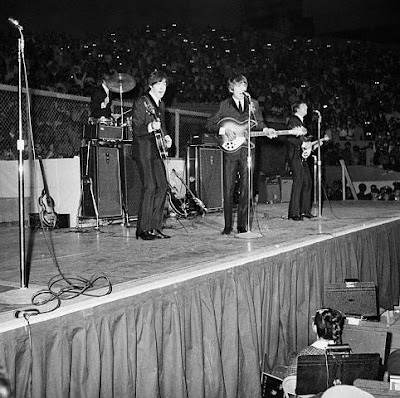 The Night I Grabbed Paul McCartney

August 19, 1964, is a night that will always remain cherished in my heart forever.  For that was the night I grabbed the man I love and was able to be close to him for at least a few seconds.   The man is Paul McCartney.  Here in Harrison-Lennon Followers, I’ve decided to share my beautiful moment with my fellow friends.

My friend Sylvia and I had front row seats at the Cow Palace.  The Righteous Brothers were in the middle of their act, and had only two other songs to do, when the audience become restless, causing unbearable tension throughout the Palace.  Parts of the crowd started chanting “WE WANT THE BEATLES!  WE WANT THE BEATLES!”  I could feel that the Righteous Brothers were getting a bit irritated and as anxious to leave the stage as we were in wanting them to.  After they had left, there was a 5-minute break.  I told Sylvia that I had made up my mind to get to Paul, even if I was kicked out in the process.  She told me I was crazy, that I wouldn’t get anywhere near Paul, and to forget the whole thing.  Me, being the stubborn Cancer that I am, shook my head and said no.  She then bet me $10 that I wouldn’t get to him.  I didn’t argue, I just said, “Okay, wait and see.”  I edged my way to the edge of the stage where two cops were standing by the steps leading up to the stage, this sort of made my hopes fail, but I was determined to try and reach Paul.    I just had to and that was there was to it.  It seemed like an eternity before the DJ said, “And here’s the group you’ve been waiting for – The Beatles!”  The screaming was one continual roar that vibrated through the Cow Palace, making it sound like a supersonic jet!  Just thousands of beautiful Beatle People showing their love for the lads from Liverpool!  Suddenly they ran on stage – George, Rich, John, then Paul.  I don’t know how I did it, I just kept pushing towards the steps, fans were rushing towards the stage in all directions and before Paul made the last step before he was on stage, I grabbed him around the waist.  I couldn’t believe that I was holding him.  I couldn’t believe it was happening to me.  All I could do was cry and say, “Paul, I love you,” over and over again.  Then I did something I hadn’t planned.  I kissed his back before I was pulled from him.  I yelled one more time, “Paul, I love you!”  I’ll never forget the way he smiled at me that night.  George pointed over at me and laughed.  I was crying so hard and I couldn’t stop!  I thought I was going to get kicked out for sure, but since I hadn’t fought with the “Bobbies” I was directed back to my seat.  All I did was cry as Sylvia kept shaking me and saying “You actually grabbed him.”  She was crying too.

I die inside every time I think I actually held him for those precious seconds.  It’s a dream I’d like to relive all over again!  I hope those of you who are reading this enjoyed it as much as I did tell you my wonderful experience!