This is a real photo 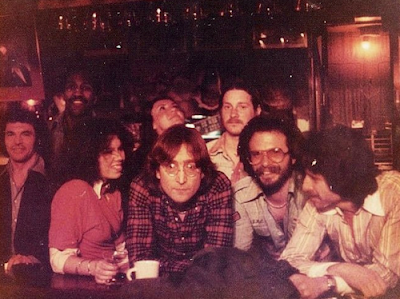 10 years ago this week I posted this photo of John and some people at the NYC bar that John and Yoko frequently went to called "Home".    The photo was taken at some time in 1977.    It is a great photo, but really I didn't think too much of it after the original fun of seeing a "new" John photo wore off.

Fast forward to April 2022 and this photograph has taken Facebook Beatle groups by storm with 100s of people claiming that it is "photoshopped."   "Look at the coloring -- look at the size of John's head..."   And on and on they go about how the photo is fake.   As you might know,  nothing irritates me the way that people assume that Beatles photos are photoshopped.   Very few Beatles photos are actually fake. Sure, there are some out there, but the majority of them are not.  What purpose would there be to fake a photo, like this one of John?

Anyhow -- I am 100% certain that this is a REAL photo.   Here is my proof.  Here is a screenshot from the Facebook page of Scott Heller.   From what I gather, Home was owned by Richard Ross until 1978, when he sold it to Scott and two other guys.   Scott is in this photo along with Phil, who also owned the bar in 1978.     Scott is the guy with the beard and glasses and Phil is behind him with the mustache. The Black man standing in the back with a mustache is named Willie Carpenter.   Scott posted his original photo on Facebook in 2010 (2 years before I shared it on this site).   I also included his friends' comments, you can see Scott say how the photo was taken the night before he "took over." There is another friend who stated he recognized Scott and Philly in the photo. 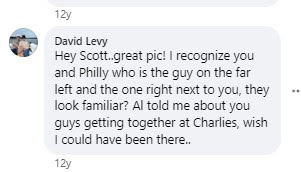 This also explains WHY John is at Home and maybe why the photo was taken in the first place.  John had spent a lot of time there in 1972 during the Elephants Memory Band era.   After being introduced to the original owner, Richard Ross, he and John formed a lasting friendship.    John came up with the slogan "A Moment in Your Life" and had that printed on the back of some of the t-shirts for the bar.   Richard was battling cancer and in 1978 made the decision to sell the bar because of his health issues.

There is another Facebook comment that I didn't screenshot from where Scott shared this photo again in 2015 from someone that said he remembered Scott calling him up and saying "Get down here,  We got John Lennon's here" and this guy did not believe him and did not go.   After seeing this photo, he regrets it. 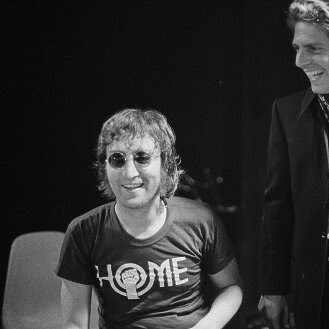 So --- will this nonsense about Photoshop and this photograph please stop.  What more evidence do you all need?

Email ThisBlogThis!Share to TwitterShare to FacebookShare to Pinterest
Labels: #Igotreceipts, 1977, Home, It's not photoshop, John Lennon