One of the things I treasure whenever I find them are the memories of Beatles fans that saw the Beatles in concert.  However --- what I love are the stories that were written shortly after the concert -- within 5 years or less from the big event.    These two stories were written in 1967 and the girls that wrote them still were excited about see the Beatles in concert. 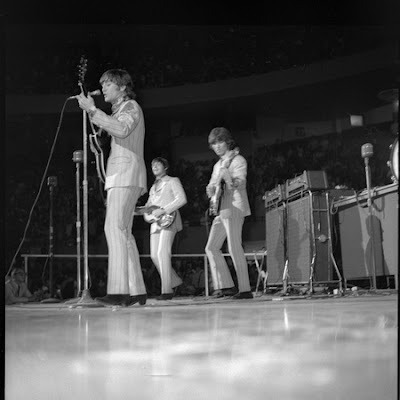 By Jean Lisieki and Patti Phillips

Picture yourself not in a boat on a river, but at Olympia Stadium on August 13, 1966.  Everyone you see is full of life and you can sense the impatience for the arrival of the idols.  Yellow Submarines are being hung from the balconies along with an infinite number of posters.  Finally, when everyone thinks that THE moment has come, D.J. Bob Green walks out.  Of course, this fails to satisfy the restless crowd who wants only THEM.  Then, as if by instinct, the congregation rises as their gods appear on stage.  The four English lads smile appearing as they start their first song, “Rock and Roll Music.”; They look undeniably fabulous in pink shirts and gray suits, with narrow pinstripes and bell-bottom trousers.  Even though the hysteria is not as great as two years previously the crowds' love is strong and deeper.  The group attempts to start “Nowhere Man” but the drummer is having difficulty was his microphone.  Mal Evans and one of the very few nice policemen fix it.  It is now about halfway through the concert.  One very lucky girl jumps on stage, but before she can reach THEM, she is stopped.   The crowd boos.  Finally, the dreaded moment comes, the bass guitarist announces the last song.  You try your best to hold them there with your love but fail.  The Beatles your beloved Beatles are leaving.  For you, it is the end of the world, but life flows on within you and without you.

First time around was August 18, 1965, at Atlanta Stadium.  It was fab, but no tact was made between them and me.  Rats.  Things I remember most – when they ran out from the 3rd base dugout, you know grinning and waving, John had something wrong with his foot or shoe or something.  Anyhow, he kept reaching for it and trying to run all at the same time.  Needless to say, that poor thing nearly broke his neck.  Paul, you know, announced most of the time, and once, after about four numbers, he said, “Goodness, it’s hot, isn’t it?” and a riot nearly broke out.  Wonder why?  When they were in the middle of one song, George’s guitar string broke and hew as frantic for a minute; then he spotted his other guitar, snatched I up, and grinned about two miles.  Paul and John were dying laughing, but Ringo looked so mournful the whole time.  One more thing.  Paul did a lovely waltz after announcing “Baby’s in Black” which he classified as “a luvly slow waltz.”  And during “She’s a Woman” his mike fell over.  And this last thing – when it was time for Ringo’s song all three bowed to him.  When they umped in the limo they waved pieces of paper out of the window.  Everybody ran to the outside railing and waved bye to them.  The ones that didn’t were either in the first aid room being treated for hysterics or fainting or trying to get out to the stage.  Some just wanted to pick the grass where they had walked. 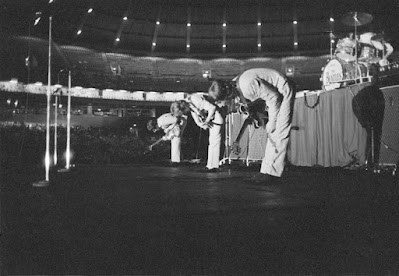 Second time around was August 15, 1966, at Washington D.C. at the D.C. Stadium.  Our seats were closer this time and we had a great view with binoculars.  I couldn’t get over their suits.  They were gorgeous.  Sort of a cream-camel color with belled pants.  The Beatles were Fantabulous!  I’ve never seen them with so much energy, you know, moving around and all.  Paul danced constantly.  George and John did their share of monkeyshines too.  They took turns (except Ringo) announcing this time.  Funny thing.  You know, they, especially John and George, would announce the song then tell what album it’s from; but they always got it wrong.  I honestly thought Paul was going to kill himself.  He was “here there and everywhere.”  All over the stage.  He and George waved a lot, George giving out off waves just turning the screams on and off.  They were panting and could barely catch enough breath to talk much less sing.  When Paul sang “Yesterday” there was really a riot.  Several ran to rails but police knocked them about and ushers carried them out.  It was beautiful.  When Ringo was singing this boy came from nowhere and went flying out to the stage (with police in hot pursuit) and got up on the stage and went for John.  IT scared me to death.  John dodged and the boy fell off the stage and was dragged, kicking, out by four men.  John and to go around the mike three times to get untangled.  Then the next thing you know, they were gone.  But the main part – we went to the stadium at 3:00 (concert time 8:00) and we were standing there (after walking around the stadium three times trying to find some small space to get inside the thing) at the gate peering in.  Suddenly, we began to see members of the other groups.  Then we saw two tall figures inside.  They came closer.  Who was it?  It was George.  Who was with him?  T was Paul.  It was Paul and George!  Natch we started screaming and frantically waving.  They were so sweet. They stopped, smiled, waved and Paul said “Hello.”  That was about the most thrilling thing ever!  Then they were gone – just like before.