A House Hippie on Tour 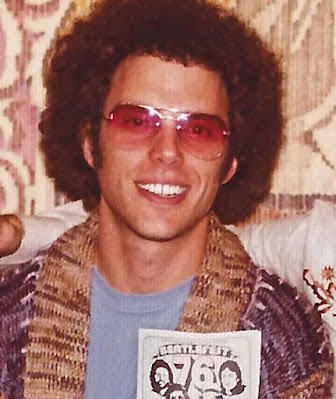 Richard Dilello is someone that I have always found to be an interesting person in the Beatles history.   Besides his book (which I have always had a difficult time reading) and his mid-1970s Beatles convention appearances, Richard has basically disappeared from The Beatles world.   This interview was conducted in 1976.

A House Hippie On Tour

During the Seattle FWCBF Convention, we made acquaintance with Richard Dilello, writer of the book The Longest Cocktail Party, on the cover of which he is referred to as “Former house hippie” of Apple.

BU:  The burning question arises, what is a house hippie?

RD:  My function with Apple was in the press – and publication office.  I was originally hired to take care of the press-cuttings on the Beatles and the other Apple recording artists.  Then my function extended to other things, to keep the tea-cups filled, to keep the drink cabinet filled and to roll marijuana cigarettes and more of those tasks.

BU:  How did you come to Apple?  Did you know anyone in the Beatles business before?

RD:  Yes, I did.  I knew The Beatles publicity officer, Derek Taylor.  And I went to him in the summer of 1968, saying “Derek, I need a job and I would like to stay in England very much and can you help me? So Derek said “I will try” and he did.  He went ahead and he got me working.  He gave me a salary job.

BU:  Did you like The Beatles music at that time?

RD:  Yes, I love The Beatles very much and I was a very big fan of theirs and I still am.

BU:  Yesterday you mentioned Jimmie Nichol in your lecture.  What do you know about him?

BU:  Whenever The Beatles were in their offices, what did they do?

RD:  They would have conferences, John and Yoko mostly did a lot of talking with the press.  They would review their financial status and take care of their social life and see about paying bills and that kid of things.

BU:  Did all The Beatles have their own officers?

RD:  Yes, each Beatle had his own office for a while.

BU:  What was your opinion about Allen Klein?

RD:  I did not like Allen Klein very much.  I didn’t think he would make a good business manager for them. I thought he was a dishonest person and it would seem to be that a lot of people agreed with that.  I remember George Harrison saying to me once that he thought Klein was the greatest and was really going to open things up for the Beatles and the terrible things people said about him was just not true.

BU:  some of the wives of The Beatles used to pop around.

RD:  Very infrequently, at least Maureen Starr and Patti Harrison stayed out of the limelight.  We know about Yoko and Linda, they loved to be photographed and loved to be seen and they were not at all shy and retiring.

BU:  What about Badfinger?

RD:  They have broken up.  Joey Molland has a group called Natural Gas and Tom Evans also has his own group.  As you know, Pete Ham died.  He was in a depressed state of mind, not really because of the last unsuccessful tour of the States, as you say here.  IT was more due to the fact that they had made so much money and were ripped off by their managers.

BU:  How was your reaction on Mal Evans’ death?

RD:  I was only momentarily shocked.  It just seemed a very bizarre and sad kind of thing to happen, and totally unnecessary.  I could not understand how a 40-year-old man could become so depressed over circumstances which I would consider to be inconsequential and too unimportant to allow your life to be ruined I mean, it was nice to work for The Beatles but to have your whole life affected by that afterward, have your whole vision so limited of what the world is.  There is more to like than The Beatles and that whole scene.  I remember somebody asking Mal Evans about Pete Ham’s death at a Beatles Convention last year in New York and Mal said “I can’t understand why anybody should want to kill himself.”  I wanted to ask him how he could say something to unfeeling, as it was Mal who took Badfinger to Apple and had so much influence on them.  Two months later Mal was dead, more or less by a sort of suicide as well.

BU:  Did you know any of The Beatles reactions?

RD:  No one attended the memorial services and I didn’t see anybody’s reaction in any paper.  They probably just said, “That’s too bad.”

This interview was made on Sunday, July 18, 1976.  Seeing that we “borrowed” some of his photographs for the Apple Story in our last issue, Richard had not given us permission to use them as yet.  We will hear from his attorney as soon as he has found one.

After Richard “left” Apple, he wrote his book which took him 4 months from December 26, 1970, to April 1971.  At the moment he lives in L.A. and he is a photographer, especially for record sleeves.

BU would like to thank Richard very much for the opportunity to write and publish this interview.