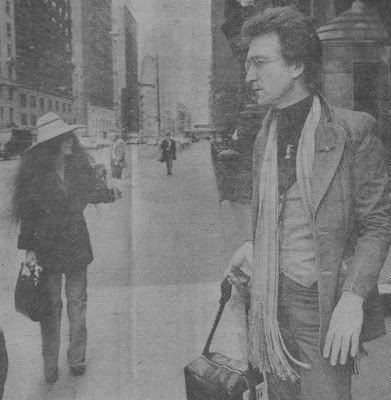 John seems to be taking a sabbatical from the business for a while at least so that he can be free to just stay at home and watch over his new little son.   Some of our New York members have reported seeing him "en Familia" walking about in Central Park.  As one member wrote, "The day was March 14 and I was near Central Park, near where John and Yoko live.  I was reading a sign on a building and turned around and right next to me was a man who looked just like John.  I put two and two together and it definitely was John.  He was looking at me like, "don't give me away."   We followed him and Yoko down the block.  John had Sean in a knapsack on his back.  Yoko was smiling at him.  John now wears his hair very short and he was also wearing clear glasses.
Posted by Sara S. at 10:57 PM