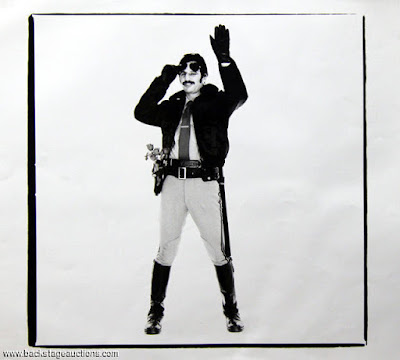 Q:  The Day after John Lennon's murder, I saw you and Bach on TV going to see Yoko Ono.  Fans were grabbing at your hair and your body.  I watched that and thought, "This must be the worst moment of your life."

R:  Well, in any crowd you're liable to have some grabbing.  But I was disgusted.  Not with the idea that they were there, but with the fact that you had a lot of dummies in the crowd all shouting at Yoko.  She really didn't want to deal with it at the time --The next day after John's death.

Q:  Did Yoko appreciate your visit?

R:  Well I think mainly it was better that we came up for Sean.  Sean was wondering what was going on.  And Yoko was distressed as you can imagine.

Q:  There are wall posters all over NY suggesting that John's death was a political murder.  What do you think?

R:  Yes, of course.  You know, until then, it never entered my head.  Or John's.  Or anyones.  No one ever thought we'd have a rock n roll assassination.  Now every rock group that goes on the road is well looked after  And so are we.  Nobody feels safe anymore.


Q:  Do you ever wonder what would have become of your life if, in 1962, you hadn't been asked to replace The Beatles' previous drummer?

R:  No, no.  I never think about that.  It's hard to say what would have become of me.  Usually, I put t down to the musical level.  No matter what, I would still have been playing the drums.  As for being one of the most famous people on the face of the death, that Richard Lester once told me.  Before him, I didn't know it; I just read gossip.  He said, "You're one of the 12 most recognized people in the world. "  It was a mind-blower.  I knew we were popular.  If you went to Tibet, they would know who we were.


Q:  The extreme fame you experienced must have been disorienting.

R:  You grow with it.  most of it was fun.  All of it wasn't fun:  getting up in the morning, living in hotels, constant moving and barricades, putting yourself in cages.  But we didn't do that for so many years.  That was only three or four years out of our lives.  During the years we were touring, I never saw half the countries we went to.

Q:  One of the things John Lennon said about you in Playboy is that people were always undertaking you as a drummer.

Q:  Why are you so excited about your new album?

R:  I met Paul in France, in Cannes, and asked him if he'd like to produce part of my new album, and he said, "yeah".  So he wrote some songs and he fixed a studio up in France.  We did four tracks:  three we're using, one I wrote.  After that, I went to George and asked him and he also agreed.  I asked John and John was up for it too.  We were going to work together in January, but he didn't make it.  I've got Steven Stills, Harry Nilsson, Ronnie Wood-- all friends -- to do tracks -- I think it's the best album I've done in years.  This one had more energy behind it.  "Can't Fight Lignin'" -- that's a track I wrote for Barbara because that's how we put what happened to us -- we were struck by lightning.