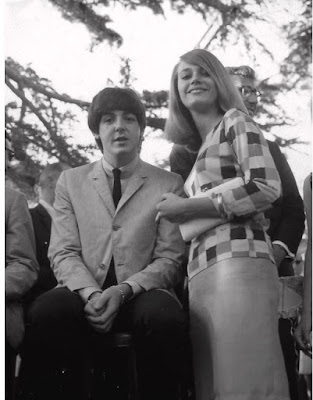 Sad news that Peggy Lipton passed away after battling cancer.   To Beatle fans, Peggy is remembered not only as the beautiful actress from the "Mod Squad," but also as someone that had a fling with Paul McCartney.

I posted the "Teen" version of her story in 2014 and you can find it linked below.


In 2005, Peggy wrote a book about her life and in an article in People magazine, she got into more detail that she would have in the Teen version.

"Paul shook my hand. 'My god, you're beautiful,' e said. 'You're not so bad yourself,' I replied, like an idiot. Later, I was asked to come to a bash that evening. I arrived almost sick to my stomach. I had only lost my virginity six months earlier, and I'd been thinking about Paul for a year. He greeted me sweetly. He played the piano. The next thing I knew we were on our way upstairs. The fantasy was playing out a little too fast. He took me in his arms and kissed me. May I say that this was the kiss of my dreams? As passionate, tender and exciting as I ever could have imagined. During our lovemaking, I caught myself thinking, how was this making me feel? I liked everything about Paul, yet when we walked downstairs together the feeling wasn't too good. I saw myself as just a young girl he had taken to bed and that was it. Paul called the next night and I went back. I wanted to try to cement a bond. Once again it was sexy. But by the time our tryst was over I wanted to go home to the safety of my parent's house. I didn't see Paul again that summer."


Peggy also tells of when she was with the Beatles in 1965 and everyone but Paul was taking LSD.

I was the only girl there, and John Lennon definitely didn't like that. He didn't like me being there at all. He was mean and sarcastic. At one point, they were handing around a scrapbook, looking at pictures of that first tour, and John made some snide comment like, "What is she doing here?"
I got the idea that John thought Paul was an idiot to take a girl so seriously he'd actually invite her to dinner when all he needed to do was fuck her after dinner.
We ended up smoking a joint in the bathroom before other people arrived; Ringo, George, Paul—and Peggy. We were having fun. I'd been temporarily cowed by John's attack, but it wasn't until I got high that I got really paranoid.
Paul and I emerged from the bathroom and floated into the living room where he held my hand, and we had a few laughs in the dark.
But I was way too high.
A sinking feeling began to take over, Paul was tuning out.

Their fling ended in 1968, when Peggy showed up in LA. at the Bungalow that Paul was staying and discovered he was there with Linda.    She supposedly took Linda's lipstick and wrote on the mirror "You made your choice."


Peggy DID see Paul again in the 1980's when she was married to Quincy Jones and Paul was working with Jones along with Michael Jackson.   Proof can be seen in this photograph.