My Two Days with the Beatles

In the story of the Beatles, I do not think of Peggy Lipton as a regular Beatlemaniac, although she was a fan of the group for sure.   She just was able to get a lot closer to the guys, especially Paul than any fan ever could.

This story, which I found in a copy of "The Beatle Digest" from 1978 is a reprint of the story she wrote for a teen magazine---either TeenSet or Teen Screen.      It is interesting because the story is a bit different than what she wrote in her autobiography in 2005.    In her autobiography, she says that she first met the Beatles at the Garden Party and Paul asked her to come to the party at their house later that night.   In this version, she claims that she was invited to the party at the Beatles house by a photographer friend and there isn't any mention of the Garden Party.     In her autobiography she says that after Paul played the piano at the party, they went upstairs and had sex.    Thankfully she left that out of the teen magazine story.    Still, unlike many of the stories published in the teen magazines, Peggy's story sounds like the truth and it gives us just another glimpse into what the Beatles were doing when they were in L.A. in 1964. 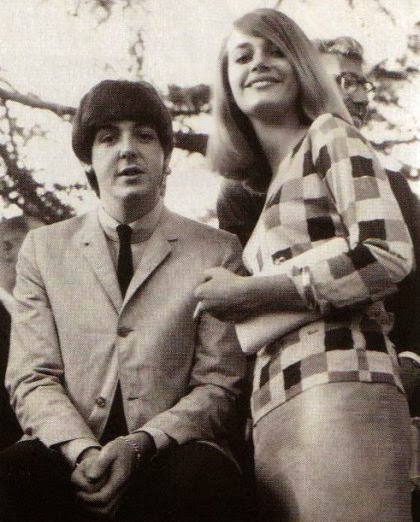 My Two Days with the Beatles:  The Story of a Beatlemaniac’s Dream Come True
By Peggy Lipton

Editor’s Note:  This story was written especially for TS by Peggy Lipton, the girl who lived the wonderful Beatle adventure you’re about the share.  Peggy is 18, a successful model, a student at Valley Junior College in Van Nuys, California and is being tested by Columbia pictures.  But, most of all, Peggy is a true Beatlemaniac.  Because of this, the tie she spent with the Beatles was as rewarding to them as it was to her.  Getting to know at least one of their American fans helped at least a little make up for the chaos that prevented them from meeting many more.  Peggy did her part to make The Beatles welcome to our country.

All of us have impossible dreams.  And mine was the same as nearly every other girl in the world. I wanted to meet the Beatles.

I’d wanted to ever since England’s singing mopheads took over the number one spot on the charts and in everyone’s hearts.  Pictures of John, Paul, George and Ringo hung in abundance on the walls of my room.  And I guess I spent probably too much time staring at my four favorites, hoping, wishing and dreaming.

I hope I can put into words how I felt when my dream came true.  I’ll try hard  because I realize I was one of the very lucky few who did get to see them, and I want to share every second of my hours with The Beatles with the other girls whose dreams didn’t come true (this time).

It all started with a phone call.  The voice on the other end belonged to an old friend.  Ron Joy, a Hollywood photographer and traveling companion of the Beatles during their American tour was calling to say hello.

But that wasn’t all he said.  He also asked me if I’d like to meet The Beatles that evening.
I don’t have to tell you that I near died right on the spot.   How I managed to finish our conversation, I’ll never know.  I started laughing.  Then crying.  I ran around the house, searching frantically for just the right dress to wear.  But I guess luck was doubly with me that night because when Ron arrived, I was breathless shaking, but ready to go.

The trip the Beatles’ house in Bel-Air was the most nerve-wracking drive I’ve ever experienced.  I couldn’t hear a word Ron was saying to me.  All I was conscious of was a ringing in my ears and the butterflies in my stomach and a voice repeating “this is it…the moment you’ve waited for.”
When we finally arrived, the barricades at St. Pierre Road were thickened with anxious teenagers.  As they swarmed about some looked at me enviously.  Others with hurt expressions in their eyes.   They all knew where I was going, and as we were cleared at the gates and preceded to the house I felt a twinge of guilt.

But the twinge soon disappeared.  As Ron stopped the car, I was suddenly filled with panic.  I’d waited so long for this moment.  What would I do when I finally met the boys I’d dreamed of?
I hardly had time to answer my question because George Harrison clad in hip-hugging jeans, came to welcome us.  Even in my fog I clearly saw that his photographs hadn’t done him justice.   His thin face and smoldering eyes made me gasp for breath.  The way he looked at me, I thought he could hear my heart pounding.  I know I could!

When George led us into the living room, both he and Ron seemed to slip away, and there I stood among the many faces and loud music.  My eyes searched hopeless for an empty chair, but in the next second, I became aware of someone staring at me.  I turned to find Paul McCartney extending his hand.  I took it anxiously and lost myself in his huge, sensitive eyes.  He was more handsome than I’d ever imagined.  His hair and eyelashes were dark and thick and he wore a reddish-orange tee shirt with black slacks.  I couldn’t believe this famous boy was standing in front of me for real, and in living color!

Paul and I found two empty seats by the record player and began talking to the sound of a Beach Boys album.  I amazed myself by being able to carry on a reasonably sensible conversation (in spite of the fact that I could scarcely breathe) and we discussed everything imaginable.   When Paul left for a moment to get me a Coke, he returned with Ringo (a living doll who goes beyond description).  After the introductions were over Ringo said, “Come on, I haven’t danced with an American bird all night.”  Then he led me to the dance floor and went into the step that makes him look like a boxer taking pot shots at a punching bag.  We danced an exhausting twenty minutes, and might have continued all night if Paul and John Lennon hadn’t come to the rescue.

John appeared huskier than the other boys, his hair softer and redder.  Square sunglasses hid his eyes.  His handshake was firm.  His wit sharply original.

The three of us talked, mostly of music.  When I asked Paul if he played the piano, he nodded no, very shyly.  But within two minutes he was across the room, pounding out a new song he and John had written the previous night.

By this time, most of the other guests had left, including Ron (who had to be up early the next morning).  I dreamily shared the piano bench with Paul as he and road manager Derek Taylor made up lyrics to a catchy tune.  When Ringo’s favorite song was layed, he sang solo.  (He’s a ham, but a loveable one).

Both he and Paul imitated Ringo’s father when he enthusiastic about the boys’ hits.  We laughed a lot about a lot of things, but the funniest thing of them all happened in the kitchen when Paul tried to call a cab for me.  After dialing the number, he waited on the phone for a few minutes.  Finally I put my ear to the receiver and found he’d been listening to a busy signal all along.   Trying to explain that telephone signals work just the opposite way in England, he sat in a tray of melted ice.  Both George and I roared with laughter, and Paul soon joined in.

And when he took me to the waiting cab he asked if I’d like to return the next day.  I smiled and said I’d love to, while secretly my heart flew out of control.

When I arrived the following day, I found I was the only outsider invited for dinner.  After roast beef and chocolate cake we sat around the huge table, reading telegrams and looking at the clothes George and Paul ad bought that afternoon.  Paul had a herringbone jacket and George a gold shirt with big puffy sleeves.  Ringo polished his six-shooters.

Later on, Paul, George and I fled past the barricades (crammed with screaming fans) to the home of Burt Lancaster to see a movie.  Ringo stopped the show at the Lancasters by tearing into the house, guns at hand yelling, “Stick ‘em up!”  Fascinated by the heated pool, George and Ringo decided to explore and ended up taking a midnight swing.

When George and Ringo went to join John at the Whiskey a Go-Go, Paul and I returned to the house in Bel Air and fixed ourselves coffee and hamburgers.  Just being alone with Paul for this short hour was the most wonderful part of my dream come true.

The other Beatles returned a little later, slightly peeved from the overanxious crowd at the nightclub.  But Paul and I struck up a duet on the piano and had everyone smiling in seconds.   The night wore on midst laughs and songs until I knew it was time to say goodbye.

The goodbyes weren’t prolonged because we all felt a hint of sadness.   Especially me.  The boys were leaving the next day, and we expressed the hopes that someday soon our paths would cross again.

Then each one put his arm around me and kissed me.

As I started my car and drove away, I realized that Cinderella’s night was over.  And I didn’t try awfully hard to fight back the tears.

I know I’ll never forget the Beatles.  And I can only hope they won’t forget me.  Not for a little while, anyway.
Posted by Sara S. at 11:04 PM