The Beatles connection to Laverne and Shirly

With the recent news of Penny Marshall's passing, I am reminded of why I used to love watching Lavern and Shirley as a child.      I loved the capital letter "L" in cursive that Lavern wore on her sweaters and Shirley stuffed cat, Boo Boo Kitty.     But more than anything else, I loved the Beatles connections on the show because they are a few of my early Beatles memories.

The very first time I remember hearing the song "Yesterday" was on an episode of "Lavern and Shirley" where they move out of there apartment in Milwaukee.    There was a montage of scenes from the past seasons while the song played.    I am not sure if it was the actual Beatles song or a sound-alike band, but I do remember automatically liking the song and connecting it to the T.V. show in my mind.

In season six, the characters all moved to Burbank, California.  This might have been bad for the show's ratings, but for a little girl in southern Illinois, it was the best!   The show was taking place in the year 1965 and each episode began by showing the two girls kissing a large cut out of the Beatles.   The cut-out poster was visible throughout the episodes because it was hung by the stairs that they used all the time.    I also recall them talking about The Beatles and Paul McCartney. 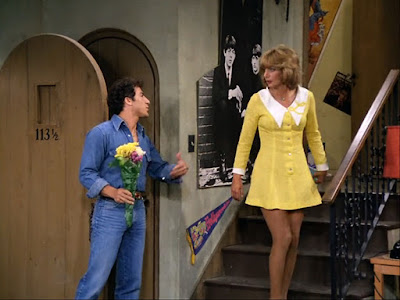 I find it interesting that by the late 1970s and early 1980s The Beatles had become a huge part of our daily culture.     I am not sure if Penny Marshall and Cindy Williams were as big of Beatles fans as the characters they portrayed on television, however, I do know that Penny got a photograph taken with Paul at the Grammy awards a few years ago. 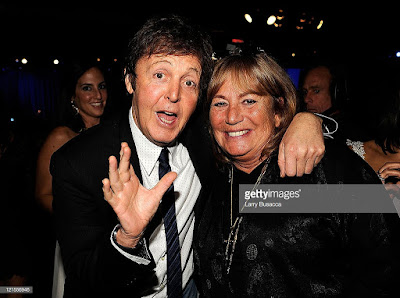