When John Lubinski met the Beatles in Boston 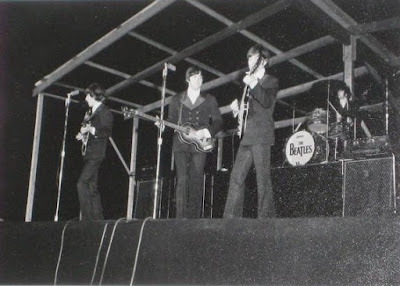 On August 18, 1966, John Lubinski did something that only a few other fans ever succeeded in doing:  he ran up on stage while the Beatles were performing and touched John, Paul and George.    the interesting thing about Lubinski's story is that he was interviewed on the radio right before he took the leap onto the stage.

While the Beatles were singing "Long Tall Sally," British disc jockey, Kenny Everett, spoke to Lubinski and asked him his name and where he was from.   He told him that he was John Lubinski from Malden.  Then Kenny says, "And you're going to leap on the stage just now?"   John replies:  "Yeah--I'm gonna try."

From there Everett goes into a play-by play:  "OK.  There he goes.  He's gonna leap up now.  He's on the stage!  And he's got a hold of John!  Got a hold of Paul....now he's getting George.   They are taking him off the stage now.  They are pushing him off,  He is grabbed by all the police.  What an interview!  Whoo hoo!  I bet this is an exclusive.  They got him  the legs and arms and they're taking him off right now.  He's being bundled in a police car.  It's all happening tonight in Boston. "

In an interview he gave with Wicked Local in 2010, Lubinski re-called, "Kenny Everett was interviewing me before I jumped onstage; I told him I was going to  do it...he  didn’t believe me. Right after that I made it up onstage, Kenny Everett went crazy.” 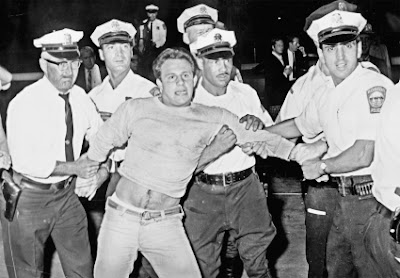 It had been Lubinski's very first concert and he sure made it a memorable one!   He remembers what happened when he was taken by the police.  "It caused a little bit of a riot where a lot of people were running for the stage or trying to get up there. “I ended up getting away. They put me in a police car, and I got out the other door. They were kind of distracted...  trying to stop the other people. I got out the door, ran to the fence, hopped over, wandered back into the crowd and got away.” 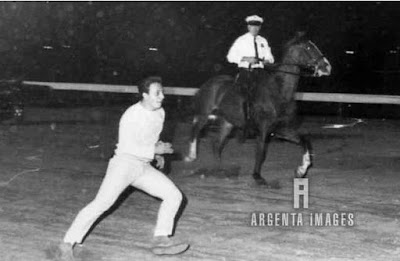 This is how UPI wrote about John's adventure:

Beatles’ Barrier Broken- Briefly
UPI (Boston)
A shaggy-maned teenager dashed down the homestretch at Suffolk downs racetrack last night and caught up with the Beatles before he was overtaken by police.
The wily invader, with the cheers of 25,000 fans ringing in his ears, scaled two fences and slipped through a row of policemen to reach the stage.
He danced from Beatle to Beatle, tagging George Harrison, John Lennon and Paul McCartney.  The Beatles never missed a beat.
The intruder was headed for drummer Ringo Starr when a bodyguard caught him from behind and tossed him off the platform.
Moments later, the teenager again beat long odds by escaping from his captors and dashing into the crowd.   About 50 exuberant fans tried to reach the British rock n rollers during the concert, but only the one boy made it.