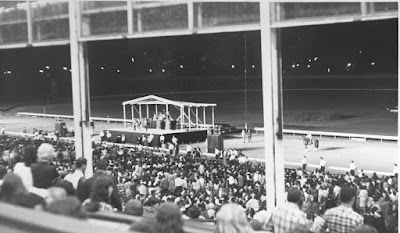 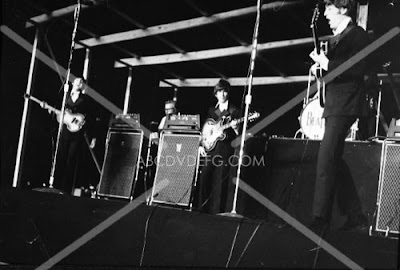 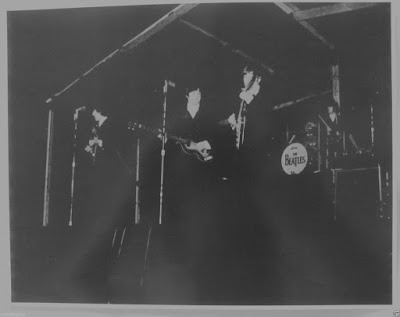 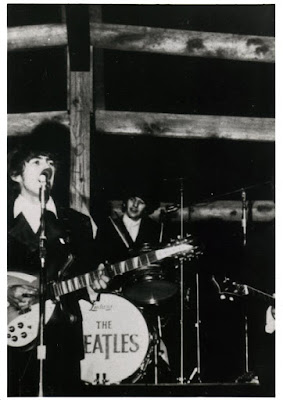 George was uptight, scared.  John kept his cool.  Paul cooed and Ringo sat high in limbo.
They played for just 30 minutes at Suffolk Downs Thursday night.  But the germ of Beatlemania raged like an epidemic for more than 5 hours.   It transformed 25,000 fans into a wailing, shrieking wall of flesh that expanded and contracted finally exploding in unhappy catharsis.

The girls, who made up 90 percent of the crowd, were crying and biting their nails as early as 6pm when the racetrack gates were opened.

From 8:30 to 10pm, the collective nerves of the audience were pulled taut.  They screamed, waved and jumped in the air each time they thought they spied a trace of the Beatles.

When the stars finally trotted onto the makeshift wooden stage built up from the dirt track, the pot boiled over.  At least three times husky men bound the guardrail and tackled the switched on strummers

Waves of girls threw themselves down the aisles.  Young children sitting in the front row had to be evacuated by policemen.

The Beatles played a round of old tunes, all of which were nearly inaudible because of the noise and tumult.

George, the lead guitarist, seemed edgy, watching the fence-runners more than he watched the floodlit audience.

John, who sparked a crisis for the group by pronouncing the Beatles “more popular than Jesus”, smiled and played it casual on stage, eyes squinting ever so slightly, as if in communion with some spirit of amplified sound.

Paul (of the cherub face) tilted his chin heavenward and rolled his eyes.  He timed his winks and waves to keep the girls in a suspended swoon.

Ringo was sitting up high with his drums, wagging his head.  His inimitable holy fool’s grin brought gasps of “Ringo, Ringo!” from the far reaches of the stands.

When the four struck up with 11th and final number, a heavy-set young man in a green shirt suddenly leaped onto the stage, dug his hands into John Lennon’s shoulders, then bounded over to Paul McCartney to pummel him on the back.   John and Paul kept playing, but George Harrison, seeing the man heading for him, turned sideways and edged back and forth.

He was near the tip of the stage when two Beatles bodyguards rushed the attacker and drove him off the stage into the clutches of six Boston policemen.

This touched off a volley of attacks by young girls, who sprinted toward the stage from every direction.  The Beatles, not even pausing to bow, rushed into a black limousine and sped toward their sixth floor quarter at the Somerset hotel, reportedly $60,000 richer for their hard day’s half hour.

Boston was the sixth stop on a 14 city tour for the group.  It si their second concert appearance in the Hub.  The first wa in September 1964, when they filled Boston Garden with a capacity crowd of 13,000.

Thursday’s performance was sold out several weeks in advance.  Tickets were listed at $4.75 and $5.75, but some girls reported paying as much as $10 for choice tickets.

Before the show began, Sharon Herrick, a 17 year old from Portland, ME, sat weeping in the front row begging neighbors for an aspirin.   She sobbed out a story of paying $7 for a ticket form an agent who guaranteed good seats. ‘He put us in section one—miles down there.  We couldn’t see the backs of their heads.  We couldn’t see the drums.  So we moved here in the middle section and we don’t care what happens, we’re not moving!”

As she shivered in a new spasm of tears, screams hit the air and a crowd rose as if on chorus.   A black limo pulled up behind the stage.

Joseph Kennedy, 13 year old son of Sen. Robert Kennedy, leaped onto his chair to look.  “What’s everyone screaming for?” he said.   Kennedy and 34 friends and relatives had driven up from Hyannis Port to see the Beatles.  They occupied two blocks of seats in front sections.
Joe, who wore a wild print tie, which he said, was “a joke” declared his favorite Beatle was John Lennon adding, “He looks suave and debonair, and I like his hair.  I don’t think my parents would let me grow mine very long.”

A leaflet circulating around the track declaring in bold letters, “Beatles plan retirement.”  Young Kennedy frowned, “I don’t believe it.”  A friend sitting next to him, 15-year-old Chuck McDermott agreed, “It wouldn’t be a sound economic investment to retire now.”

Two blonde 19 year olds form Somerville consulted their Ouija boards to verify the rumor.  After shutting their eyes and moving the marker around a little board, Diane Turner said jubilantly, “They’re not retiring.  But Paul’s getting married to that actress, Jane Asher, on November 23. “A dying wail erupted from the next row.  “That’s not true.  No, no, no.  Don’t believe it.  Paul isn’t going to get married,” said Donna Provanzo, 14, of East Boston.