Who would believe it?

This short story about George on SNL in 1976 is from the Jan/Feb 1977 issue of the Write Thing and was written by Regina Vogal. 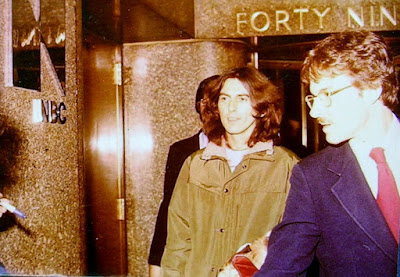 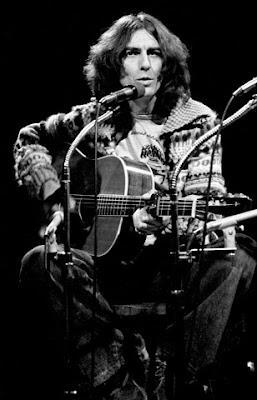 Who would ever believe that an NBC-TV employee would stop me on the street and ask if I wanted to see George Harrison tape a television program?   Well, that's exactly what happened on November 18 (1976).  NBC had just disclosed that afternoon that George would not be appearing live on Nov. 20th Saturday Night Live but on a pre-recorded segment to be taped that night to a private audience from 7-10pm.

We decided to go to NBC studios at the end of the taping, but we arrived early.  We started to walk around when an employee told us where George was taping.  the "private audience" was the ground floor filled with NBC personnel and friends.  People were being picked up off the street to fill the balcony, which consisted of about 75 people.   We had missed a good deal of the show, but saw Paul Simon do "Homeward Bound" and George do "Here Comes the Sun" for at least four tapings, along with seeing George smile after someone screamed out "Dark Horse" as a request, and also the time time when Paul Simon introduced one of George's films as CrackerJACK Palace.  About two hours after the taping, George came out and met a small crowd before he left in his limo.  Not bad for an ordinary Thursday night!
Posted by Sara S. at 9:19 PM