You won't see me

I have heard Jorie Gracen tell this story in person at least twice at Chicago Beatlefest over the years.   The way she tells it is so funny!   When I found her story printed in the July/August 1976 issue of the Write Thing, I was happy to read it and be able to share it with you all.   I always think it is neat to read a Beatle fan meeting that was written shortly after the meeting occurred.    When this story was written, Jorie was just a Paul fan out to meet her favorite Beatle.   Jorie has "grown up" to be a rock photographer and some of her photos have appeared in the CD booklet that go with some of the Paul live CDs from the 1990s.  She also as a book of Paul photos called I saw him standing there.    This story was written along with Mindy Goldenberg.  The photos I included from the 1976 Wings tour were not taken by Jorie but I did include a photo of her and Paul taken during the "End of the World" tour. 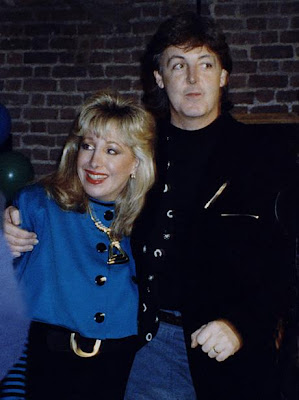 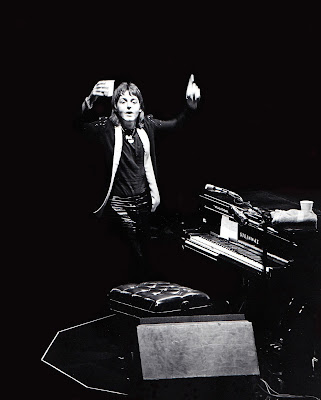 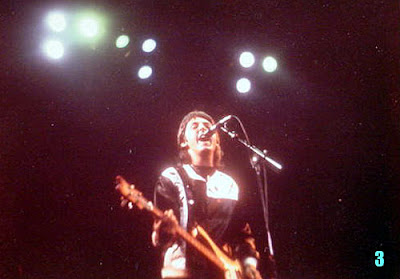 Contained herein is the exciting saga of two ordinary obsessed girls who winged it around the U.S. of A. in search of Macca, only to meet with constant frustration.  A few bright moments lightened our futile adventures, such as our meeting with Joe English and the time Jorie almost got Paul's autograph.

Our little saga starts in Chicago when Jorie, with a little help from her friends, obtained an official photo pass to catch Macca's gleaming smiles right below the stage.  Not wanting to pass up this golden opportunity to give Paul something personal, she had a head transfer photo of a Beatles butcher cover printed onto a black t-shirt (think he wears large?).  When he first appeared out of the mist, we all thought we died and went to heaven.  Jorie began to wonder if she'd be able to hold the camera straight (she did, for about 1500 pictures!).  She threw the t-shirt up to him during "Jet", and it landed with great accuracy right by the famous foot.  With the blindness that was to continually frustrate us, he looked right past it.  Denny Laine saw it however, and added to the moment immensely by laughing and snickering at Jorie's efforts to get Macca's attention.  She took the t-shirt off the stage and tried again, spreading it carefully in front of him so that the picture showed quite clearly.  At that point Paul went to the piano for "Maybe I'm Amazed".  When he returned to center stage for the acoustic set, still looking straight past it.  Jorie gave up and yelled desperately "Linda."  She promptly picked it up when Jorie threw it at her, figuring it was for her.  When she looked at the Beatles on the shirt, she was none too pleased and threw it down on the piano.  So much for trying to give a gift to the man who has everything!

After hearing from a once reliable source that the McCartney's were staying in Highland Park (a ritzy suburb of Chicago), we cruised around there the whole day, only to hear on the radio that he was actually staying in Libertyville. Back we went, checking out every stables and horse farm, to the utter amusement of one woman who wondered if we wanted some of the manure from Paul's horse as a souvenir.

In L.A. our luck was getting better all the time.  At the first concert, Ringo showed up after the second encore on stage, looking every inch like "Mr. Hollywood", shades and all.  The second night, everyone "went potty out there", Jorie ripped out her vocal chords screaming the "oh yeahs's" in "Soily" and Mindy almost got smothered to death when they stormed the stage.  The third night was flawless, especially when he picked up the red carnation we threw on stage after "Yesterday."

Naturally we were among the die-hards who waited for the limo to drive in every day at 5 for the sound checks, and out at the time between midnight and 2 am.  One afternoon, while driving in, Paul saw us and gave us the victory sign and a warm smile through the window.  Things like that make it all worthwhile!

But we were determined to meet him so we waited outside until 2 am the night of the last concert in L.A. along with about 50 other fanatics.  When we saw them getting into the car (security was very loose by this time), Jorie ran down the driveway and was rewarded by reaching the car before it took off.  She ran to the window and Paul waved to her.  She looked in and saw him resplendent in a while suit and dark shades, looking thinner and younger than onstage.  Excitedly, she grabbed a piece of paper hoping to get his autograph for posterity, and stuck her arm in the window with it.  All of a sudden a nasal voice from another corner of the limo said, "I have to close the window now", and proceeded to push the button.  Linda, of course.  Frantically Jorie cried, "Can I just have your autograph, Paul?" and Linda said, "Yes" while Paul nodded smiling.  He continued to sign his sign his name for what seemed like hours and then valiantly attempted to give her the autograph through the now closed window.  When he repeatedly shoved it against the glass, Linda generously opened the window, and then the long arm of the jailor man grabbed Jorie.  So Paul drove off into the night with his autograph and Jorie kept thinking "allI got was a photograph and I realize you're not coming back with my autograph."  At least she saw the famous face, though.

Undefeated, we drove up to Ringo's house the next day, after having been tipped off by some Showco people, bless them.  Spotting Joe English's car in the driveway, we thought where there's one Wing, there might be more and boldly knocked on the door.  After a few obligatory denials, the blonde woman who answered (it wasn't Lindsey de Paul), said that Joe was leaving for the airport and didn't have time to see us.  But just then, Joe bounded out, nice as can be, signed autographs and chatted.  He reacted a bit strangely when we mentioned Paul.  We asked if he had gone back to England yet and Joe said, a little disgustedly, "Paul went to the moon."  But it was still pleasant to end to our visit, as were the 5 Beatle movies we saw the next day at a local theater.  They must have known we were there!

But the next time the lights go down and he's back in town, you can believe that we will meet the Big Mac himself!