On October 20, 1998, Ringo Starr held a CD signing for his Vertical Man and Storytellers CDs at the Tower Records in New York City.     I find this to be really interesting because we all know Ringo has the "anti-autograph" Beatle.  I found this story about some fans that got the rare opportunity to meet Ringo and get his autograph in the Beatles Unlimited Magazine. 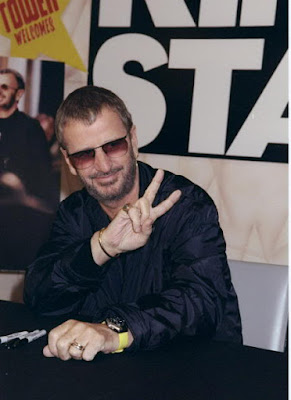 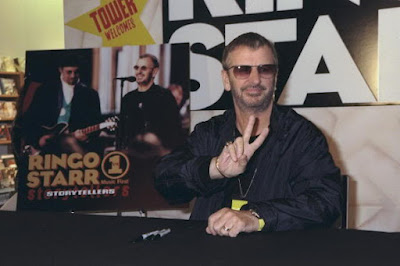 Jorge Bernardo, President of the Drive My Car Fabulous Beatles Fan Club organized a trip to New York to see Ringo at the autograph signing at the Tower Records store at 66th Street and Broadway.  Nine fans went, including Michael McKee, who runs McKee’s Beatle Museum in Virginia Beach, VA, USA.  There was virtually no traffic on the highways and we arrived in New York shortly before 3am.  To my surprise, the street of Manhattan seemed largely deserted.  The city that never sleeps, appeared to be largely asleep.  We drove by the piers on the West Side.  We passed the Circle Line Terminal, the new passenger terminal, and the aircraft carrier intrepid.  We arrived at Tower Records at 3am.  There were four people in line:  a woman from Franklin, MA who had arrived at 11pm, two men from Roanoke, and a man from Long Island.  Since the line was so short, and since several people in our group had never been to New York we drove by the Dakota and stopped very briefly before returning.  It was a beautiful night.  During the night the temperature dropped to 52 degrees but the sky was clear it was possible to actually see Orion almost directly overhead.  When the staff opened Tower Records people began questioning them about whether or not they would give out wristbands.  The person who appeared to be in charge spent virtually the whole morning standing on the sidewalk smoking cigarettes.  We were told:  There will be wristbands, there won’t be, the manager says they don’t work, they don’t have any but might get them from another store, they will make a decision at 11pm, 1pm, not before 2pm.  Soon after the store opened, some of the store workers ordered the waiting fans to move the line off the wide sidewalk on the Broadway side of the building and onto the narrow sidewalk on the 66th Street side.  The problem was that there was a construction site on the corner.  The sidewalk was all torn up and there were heavy construction vehicles belching diesel fumes.  Halfway down 66th Street was another construction site.  For a large part of the morning jackhammers and backhoes were in use and the noise was deafening.  The people who work at Tower claimed there were complaints for the next-door hotel about the line being in front of their building.  We were directly in front of a subway entrance.  Hundreds of people streamed in and out of the subway.  There must have been a school nearby.  Hundreds of kids poured out of the subway.  Throughout the day people asked what we were waiting for.  When we told them some laughed, some didn’t seem to know who Ringo was, and others seemed excited.

Around noon, someone who was using the bathroom at the Barnes and Noble store across the street announced that Sting was having lunch in the café.  Several people ran over and I heard that Sting was surrounded by a large group of people requesting autographs.  At lunchtime, I walked over to the Dakota and Strawberry Fields.  There were some flowers and photos on the Imagine mosaic lighting a candle.  Around 5pm they began constructing a stage in the center of the main floor of the store.  There was a raised platform with a table.  Behind the table was a huge “Ringo Starr” sign with raised white letters on a white background. On each side of the stage were large color photos of Ringo from the cover of the “Storytellers” CD.

Around 5:30pm store personnel suddenly began handing out wristbands.  They announced that anyone who was not present would not get one.  Two people from our group, which had been waiting for 14 hours were missing.  Two other people from our group ran off to find them.  Meanwhile, the Tower people giving out the wristbands were arrogant and obnoxious.  The people who had been waiting for so many hours closed ranks.  The people in front of and behind our group confirmed that we had been there since 3am and they, the people from Tower, eventually agreed to give the missing people wristbands, but not before one of them had been reduced to tears.   By around 7:00 people were packed around the building and down 66th Street.  Someone said they counted 350 people on line and there was a crowd of press people (or people pretending to be with the press) in front of the door.  Inside the store, CD racks were used to block off the area in front of the stage.  When Ringo arrived the press people were allowed to take photos.  They were playing “Vertical Man” and Ringo asked people to sing along.  The people in the autograph line were told they could not take photos.

Ringo looked great.  Short hair, round sunglasses, trim beard, black shirt, and pants.  It’s true:  Ringo is the only Beatle to get better looking as he gets older.  I offered him my hand and he shook it.  I told him that I’d heard he was a vegetarian and he responded that he was “about 360 days a year.”  I went upstairs to try to take some photos from the balcony.  I watched as Ringo turned and smiled at each person as they approached.  Some people posed for photos.  Someone handed him a small child who he hugged.  Many people offered small gifts.  I gave him an SPCA pin.  Michael McKee gave him a T-shirt from the opening of the Beatle Museum.  Jorge gave him a Drive My Car fan club shirt.

Roy Young, who played with The Beatles in Hamburg was a guest at the Washing Beatles Celebration sponsored by the Drive My Car Fan Club.  Roy is working on a new  CD and wanted to ask Ringo to play on it.  One of our club members who talked to Roy told Ringo that Roy would like to talk to him and gave him Roy’s phone number.  Ringo said he would try to call Roy Young.

There was nothing to prevent anyone from going up the front of where Ringo was signing, so many people were standing there snapping photos.  Eventually, some of the Tower people ordered every one to leave.  One woman began to cry when she got to Ringo.  He took her hand in both of his and said “tears of joy.”  Every one in our group wanted to touch a Beatle and be touched by a Beatle.  WE all wanted to shake Ringo’s hand.  And we all did.  And we all wanted to say something to him that would require him to respond to each of us individually.  Every one said something to Ringo that he responded to.  As we departed for the long 4-hour drive back to Washington, we were all tried, but we were in ecstasy.

I heard that someone has a report on the internet which says that Ringo left the store at 8:15pm with many people still on line.   No announcement was made that Ringo was leaving.  Many people who had purchased “Vertical Man” and “Storytellers” tried to return them.  At first, Tower refused to take the ones which had been opened but later relented.

The person who put this on the internet attacked Ringo.  The person said he took off from work and had been there since 4pm.  Ringo should only have signed one CD to make the line move faster.  He said he had bought both CDs and returned them to the store.  If he is such a devoted fan, why hadn’t he already bought “Vertical Man?”  By and large, it got excellent reviews.  I think it is one of his best.

If this person had the whole day off, and if he is such a huge fan, why did he go to the store so late?  There were people in the line beginning at 11pm the previous evening.  At 4pm some people had been in line for 20 hours.  We had been in line for 16 hours.  We went that early because we wanted to be sure to get to meet Ringo and we did.    I understand the disappointment of not getting to meet Ringo, but I can’t comprehend the anger directed at him.

It was very gracious of Ringo to sign two items and to personally greet each person coming through the line.  It did slow things down.  It could have moved faster.  He could have signed autographs without even looking at the people in line.  That’s what many celebrities do at signing.  But it is not such a wonderful experience for the fans.  And it would be particularly disappointing to wait on line for 16 or 20 hours for such minimal interaction.

Thank you, Ringo, for being so gracious with us and giving us the experience of a lifetime!