Henley for the first time 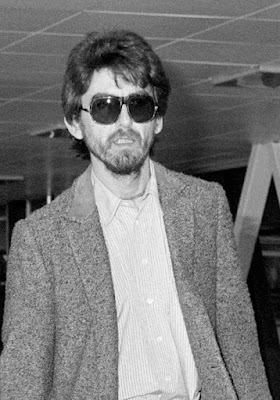 Henley for the first time

My friend Lila and I went to Henley on her birthday (September 27, 1979), the 4th day we were in England.  We got there around 10:30AM.  We had a fright on the way – Lila misplaced her rain cape and we thought it was on the other train after we changed at Twyford, but we were asking the station man in Henley, a man ran up with it!  Miracle #1.

We got out your letter with the directions – I had butterflies in my whole body – writing this now, I am feeling that same feeling of excitement at the opportunity of seeing George after waiting too many years.  “What will happen?  Will he speak to us?  Or worse – will we speak to him?!”  Or should I say will we be ABLE to speak to him?!  We walked along the quaint narrow roads of Henley – every step we came nearer to George!  When we reached the center of town we took the road up the hill to George’s that is to the right of Town Hall, West Street – my reasoning being it’s a one-way street down the hill so if George was driving down the hill, we’d see him.  Anyway, we got close to the end of the road and saw the distinctive light and dark bricks of George’s wall with a turret on the corner.  We walked around it and WOW – there is was!  The gate to George’s house with the sign proclaiming “Friar Park.”  It was closed – not that we would have gone in, the sign inside the gate says “private property, trespassers will be prosecuted – beware of guard dogs.”  The other sign says “drive slowly.”

I had to take notice of the signs to bring myself back to reality because I was so stunned by the beauty of George’s house, not to mention the possibility of actually seeing George.

Well, we took photos of every angle you could think of – Lila by the gate, me by the gate, the gate alone, etc.  While we were doing this, George did not come out.  So we decided to walk up the country road, Gravel Hill, to see if we could see over the fence – with barbed wire, I might add.

It was a bright, beautiful warm day.  We found the laced where we could look over the fence and see the main house.  Someone had placed a concrete road marker in the right place to stand on and take a photo of the main house.  There were some ripe berries to eat while looking Being there was only one angle for photos, we took a few and walked up the road further to “see what we could see.”  We came to another house at the edge of the property.   It’s much smaller than the gatehouse.  There were two men working on the house, scraping moss off the tile roof.  I wanted to ask them if George was home but I was too shy and didn’t want to appear foolish.  Although I’m sure they knew what we were there for!  We went on further up the road and walked down a small road that went by George’s back gate.  It was open and some trucks drove in.  Being adventurous, we walked down a path around the rest of the property and found a wooden gate off the hinges, so we slowly and quietly crept in the yard about 25 feet when we heard someone coming by about two feet away, so we ran out of the gate!  We continued around the property along the path and could hear men working on the other side of the fence – it was about 10 feet tall.  The path runs into a residential area so we went back the way we came.  We noticed Lila had dropped her wallet so we started to look for it.  We found it by the open gate.  Miracle #2.

We retraced our steps back to town.  On the way back, I got up enough nerve to ask the men on the roof if George was in and they said yes.  We didn’t believe them, because the pirate flag was not up, at least we didn’t see it.  Anyway, we went back to town and had lunch.  We couldn’t believe how all these people could be just carrying on their daily life when George was less than a mile away!  After lunch, we walked back up the road to George’s.  As we were approaching his house, a car drove in.  WE speeded up our pace and arrived at his gate at the same time that an “old time” car (like a Model-T) came driving out of the gate.  An older man was driving.  He stopped the car just outside of the gate.  I said, “That’s a beautiful car.  Is it yours?”  The man was getting out of the car and laughed and said, “no.” He walked around the car and opened the hood and started fiddling with someone inside.  I realized that the gates were open and I could take a photo f the road up to his main house without the gate in the way.  So  I walked past the car and got ready to take a photo.  I’m nearsighted, so I wear glasses, but I have to take them off to take a photo.  So, I took them off and had the camera up to my face and was just about to take a photo when a man walked out of the gatehouse and said “Get back, no pictures!” as he waved his arm at me as if to shoo me away.  Well, I didn’t take a photo.  I was startled and stepped back a few steps, as the man walked toward me. I looked at him trying to figure out if it was George’s brother Harry.  He didn’t look old enough.  Then I thought maybe he was a workman – he had on a down vest and shirt and jeans and work boots.  As he walked up and finally stood at the other side of the gate, I realized it was George! Miracle #3.

He had really short hair and a thin mustache and looked like he hadn’t shaved for a week.  I was shocked!  He’d told me to “get back” but he didn’t say anything when he walked up.  He just stood there and looked at me and then I said, “You don’t want me to take pictures?”  “No.”  I didn’t think he was mad because he didn’t tell me to get lost and never come back.  Another man started talking to George (I don’t know where he even came from).  They were talking about the car.  It had stalled and the older man was still trying to get it started.  I asked George, “Is that your car?”  He said with a smile and shake of his head and a look in his eye.  “No, it’s his,” pointing to the older man.  I Said, “But he said it wasn’t his!” with a look like “I know it’s your car!”  George and the other guy talked for a while and I suddenly returned to reality long enough to walk over to where I’d left my tape recorder and I walked back to the gate, but not up to where George was, and recorded him saying “No, Olivia’s out.”  I guess the guy had asked about George’s wife.  Well, at that time, the man got the car started and turned it around, and drove it back into the yard and up the road.  George and the other fellow got in another car and followed up the drive – George looked back at us as the car left.  We just stood there for a few moments looking up the empty road.

I started to take the photo I was originally going to take and a lady stepped out of the house and said, “No picture please.”  I did take that one.  I guess it was George’s sister-in-law.  So we then gathered our coats and things and walked across the street.   We stood there with our mouths open and stars in our eyes!  Oh, during this whole thing, Lila stood behind me always and behind the pillar, not daring to look at George too much – she couldn’t control herself if she had looked at him too much.  We could barely speak to each other – needless to say, I didn’t remember the train ride home.  I still haven’t recovered and I never will!

Email ThisBlogThis!Share to TwitterShare to FacebookShare to Pinterest
Labels: 1979, Friar Park, George Harrison, With a little help from my friends fan memory