Got Back Tour - An honest Paul McCartney concert review 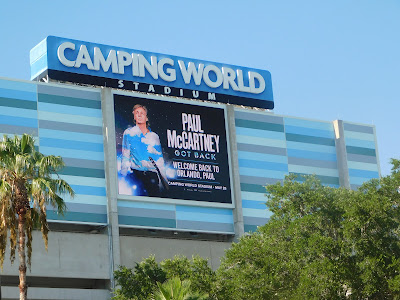 This past Saturday (May 28, 2022) I saw Paul McCartney perform at Camping World Stadium in Orlando, Florida.    I flew to Orlando from my home in the St. Louis area because I wanted to see this tour.  It was literally a dream come true to see Paul again in concert.  All during the lockdown in 2020,  I was super focused on the fact that I wasn't able to go any Beatles events -- especially seeing Paul McCartney live.   I questioned if 2019 was really going to be my last concert and I didn't want that.    I am beyond happy that I had a chance to see him again and can accept that it could be the last time.

Here are my honest thoughts about the concert

I am sure I have written about this before.   People who just go to hear Paul McCartney perform songs are missing out on the true experience.    The atmosphere is worth taking in.   It is fun to watch the fans arrive and see the t-shirts and outfits everyone chose to wear.   It is amazing to meet up with friends that you may have only spoken to over social media.   The excitement of listening to DJ Chris play the Paul songs and then seeing the screen show can't be beat.    I really advise you to take the entire day for Paul.  Traffic at these events have been a nightmare and some ticket holders have missed the entire concert because of traffic.   Take this advice:  arrive before 4:00pm.

Thought #2 -  The limo watch is very stressful but worth it. 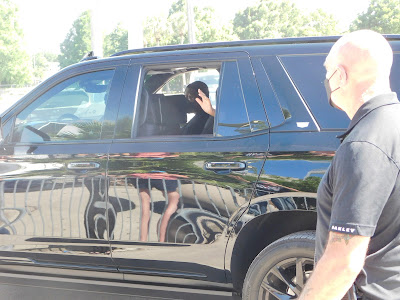 Sometimes the limo watch to see Paul arrive is easy and other times it is like the one in Orlando and it is stressful.   No one knew where Paul was going to enter.   Many fans were sent on a wild chase around the stadium in the search for Paul.   Here is my advice on the limo watch:  if someone (ANYONE) tell you that Paul is already inside of the stadium, do not believe it and keep waiting.    If you are able to see Paul arrive -- it is SO worth it!   There was a very small group of us and Paul saw me in my Minnie Mouse ears with a British flag on it and smiled right at me!

Thought #3 -   The handicapped section isn't the best seats in the house.

Due to my mom needing a motorized scooter due to long Covid, we had to get seats in the handicapped section of the Stadium.   I purchased the best seats we could get on the field.    While I knew we wouldn't be up in the very front, I thought we'd get the seat that I chose on the Ticketmaster site.   Now I am not sure if this is standard or just in Orlando.  When we arrived the handicapped section was "first come-first serve."   The seats weren't numbers and so we had to sit wherever we could fit.   I had picked seats that were closer to the stage than where we ended up.   That wasn't a huge deal, but some people who got there right as the concert was starting, could not squeeze into a spot and I am not sure what they did. 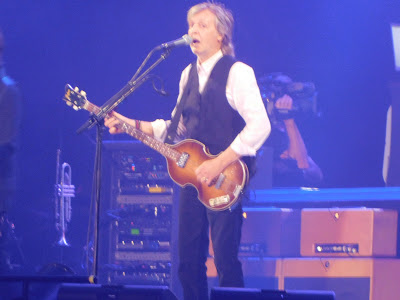 There has been a lot of talk each year about how Paul's voice doesn't sound very good anymore.   And to a certain extent that is true.   Songs such as "Can't Buy Me Love" and "Maybe I'm Amazed" were ones where Paul couldn't sing the higher notes or hold notes out as long.   However -- he is almost 80 years old and is on a big tour.   So what if he can't sing as strong has he one could?   He still sounds good and there is no doubt that it is Paul singing.   He sounds just like Paul McCartney!   I am thankful for the band for helping Paul out in the singing because they can fill in some of those high notes that he just isn't capable of singing anymore.

Thought #5 -  The setlist  hasn't changed very much and that is fine! (the jokes are getting old though) 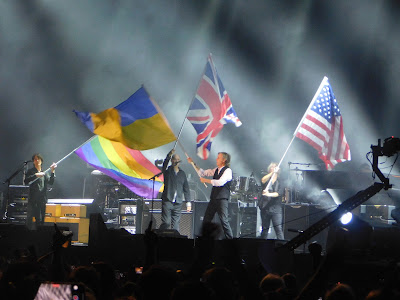 Paul sang basically the same songs he has sang in concert over the past 10 years (maybe more).   And you know what?   I love it!    It dawned on me that Paul must have a reason for singing these songs.  Either it is because that is what fans (casual and hardcore) want to hear or maybe because HE wants to sing those songs.     I was happy to hear "She Came in Through the Bathroom Window" because I don't recall hearing that one before.   And the "I've Got a Feeling" with the "Get Back" film of John singing his part while live Paul sang his was really amazing.     While the same songs didn't bother me -- the same jokes made me roll my eyes.   The whole "Sign my butt" joke is OLD and was never funny.   Taking off his jacket and saying "this is the only wardrobe change for the evening...haha," has been overdone.    Paul is such a Dad with his Dad jokes.    Paul needs someone to write some new material for him.

One interesting observation  -  "My Valentine" used to be the song where people left for their beer and bathroom break.   During this song, Paul shows the video with Johnny Depp doing sign language to it and playing the guitar.   He has shown this same video literally for 10 years during his shows.   Now since the Johnny Depp trial, people have been staying for the song and cheer whenever Johnny is on the screen.    I've seen people online say how bold it is for Paul to take such a strong stand in favor of Johnny Depp and I want to say, "People -- this is the same video he has shown for years.  It is on Youtube.  You just didn't notice because you left to get beer."

Go see Paul on the Got Back Tour --  It is a night you won't forget.

*All photos taken by Sara Schmidt