This is the 2nd part of the story from  Beatles Unlimited (March/April 1976) about a group of fans that spent the time Wings was in the Netherlands following them around and talking to them.

I’ll Be Waiting For You Baby

The next morning we were there (Jan had been to the Neil Young concert, but had not seen Paul, who probably stayed backstage).  First, we went to buy some more film (in total our team shot over 800 photographs in two days!)

Back at the hotel, we talked to the day-porter who could give us no more information than that Paul was intending to leave at two o’clock.  Some time later we talked to Koos, who said Paul had been to see Neil Young, while he himself had gone to see Rory Gallagher.  He said Paul would be leaving at 2:30.

As I went to the tobacconists to buy some chewing gum, Joe came out with Steve Howard who walked to walk to Amsterdam’s major shopping street the Kalverstraat as Steve wanted to buy a leather bag.  We still don’t’ understand why they didn’t talk a taxi or one of the hired limousines.

BU: “Hi Joe.  Do you think we could have a short interview with you?”

Joe:  “Well we’re going to be leaving at three-thirty and we’re not going to be back until about midnight tonight.”

BU:  You’re going to have a soundcheck in Rotterdam?

Joe:  Well, if it’s possible…if there’s time, yeah, who are you with?

Of course, I didn’t get a chance to talk to Joe again, which is a pity for I had some interesting questions in store, like “Are you a hired musician of Paul, paid a regular salary, or are you a member of the band with all financial risks involved?”

Joe and Steve went in the direction of the city, returning some minutes later wet from the rain and “not feeling like walking.”  Steve took a limousine and went to town and Joe went inside.

In the same period, Bob Ellie returned with a pile of pictures, but he answered my “Got any pictures?” with a hysterical “Nooooo!”

Thaddeus went out by taxi to have his instrument fixed at Dijkman’s musical store at the Rozengracht in Amsterdam.  We also talked to Henri Audier of Bovema again who said Paul had to be in Rotterdam at two thirty which we were sure they wouldn’t make, judging from Joe’s words.

In the afternoon, the minutes seemed to creep.  At about two – Paul, Linda, and the children were in the bar having a drink.  They went upstairs some time later and Joe, Jimmy, Denny, and other members of the band came down and waited in the lobby.   Koos came outside at about half-past three and ordered the limousines to be stand-by. 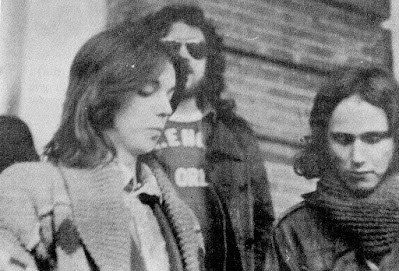 If I Ever Get Out of Here

It seemed according to Koos, that Joe and Jimmy were fed up with waiting for Paul and they decided to leave for Rotterdam. Thaddeus, tony Dorsey, Steve and Howie Casey came out, followed by Jimmy and Joe.

I went up to Jimmy to tape some more statements.

Jimmy:  Yeah, off the new album.

BU:  So no more Medicine Jar?

Jimmy was called away by someone and left me with the problem of Wino Junko, which was not in the show.  The next car was for Brian and his companions, while Steve Ellis was called back to take another car (“Every minute counts!” he murmured).

And then there they were:  Paul and Linda.

Paul came out with his hand folded as if in prayer, saying “Achtung, Achtung” (which is German for attention).  As a girl wanted him to sign a Venus and Mars cover I walked up to Linda, so said:

Henk:  Hi, how were the Danish and German gigs?

Henk:  I heard it on Luxembourg

And then Paul (who was fooling around with a little boy who shouted “It’s the Beatles!”) and Linda were ordered into one of the limousines.   Paul and Linda were in the back, with Denny and his wife in front of them.   We ran to Erik’s Daf ready to start the race to Rotterdam. 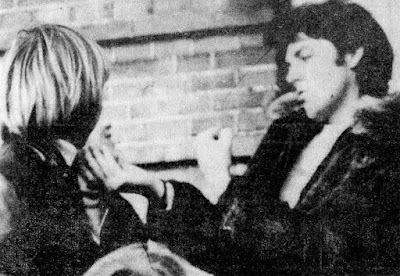 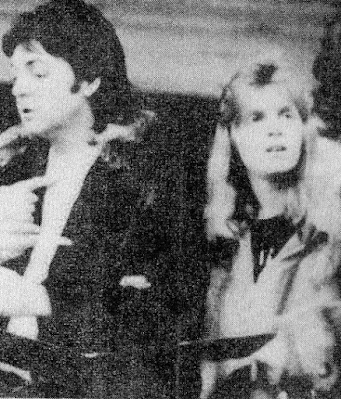 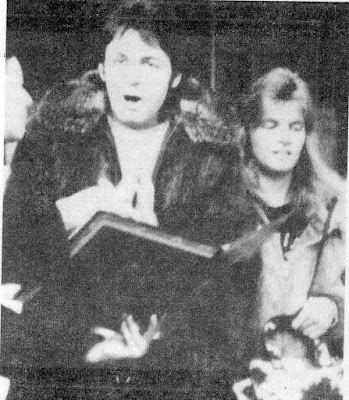 And When I Go Away

We managed to keep up with the limousine quite nicely in Amsterdam (incidentally passing the Amsterdam Hilton where John and Yoko spent their Bed-in in 1969), but as soon as we were on the motorway, we lost them in the busy traffic.

We managed to get quite close to them again once, but then their driver drove past a red traffic light at a very busy roundabout about halfway to Rotterdam   When the light went green again, Erik did his utmost to overtake them in the suburbs of Rotterdam and Linda waved at us.

We went in the direction of the Ahoy Sports Palace, but they suddenly overtook us, and the driver took a very strange sideway.

We managed to keep in touch, though Erik almost fainted behind the wheel as a result of the great pressure of driving 80km in a town and 125 on the very busy motorway.

When we got near the hall we were joined by two more cars with fans and when we got to the artist entrance about 20 fans were waiting there.  The driver used an old Beatles trick to get the fans away from the entrance:  he drove past the group of fans and then seemed to be heading for another direction.

The group of fans followed the car (as we and the other two cars did, Erik driving backwards very fast) and then in the parking ground the limousine turned around and went back to the entrance.

The three cars (including ours) following the Mercedes almost collided but Erik stopped.  We quickly got out and ran to the entrance.

I managed to say some words to Paul and Linda about the drive from Amsterdam, but it was too busy to tape interesting quotes.  After they went in, we went to have our dinner before the concert. 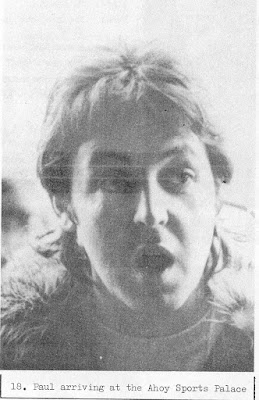