The virtual Fest for Beatles Fans -- was it worth it?

This past weekend was the Fest for Beatle Fans (known far and wide as "Beatlefest").   This was the first Fest held in person since 2019.  I thought about going to the Fest in New Jersey in person, but there weren't any rooms available.   So I decided to give the virtual ticket a try.   For the first time ever, they were doing what we in education call the "hybrid method."    It is both live in-person and online through Zoom.

If I am honest, I didn't have very high hopes for the virtual Beatlefest.   I figured there would be a lot of technical problems and confusion, and some of it would be boring due to dead airtime.   And I am very happy to say that I was wrong!

My mom and I always attend the Fest together and so we decided to have our own Fest at my new condo.  My mom spent the weekend with me and we wore our Beatles t-shirts.   We rearranged the room, ordered food, and as usual, went into the event with the attitude that we would have a good time.

There were two Zoom rooms available to watch.  The first one was the Main Stage Zoom.  This was the one that showed all of the concerts and interviews with the main guests.   The other Zoom was the interactive room.   This room had a variety of things going on.   I enjoyed the "virtual hub."  Roland was the guy in charge of grabbing various guests and interviewing them on the fly for us virtual fest-goers.  Roland was amazing at interviewing and keeping things alive and positive.  The virtual hub also showed some live recordings of different Beatles-themed podcasts.   At the times when the virtual hub was not going on, the camera would switch over to the room where they had panel discussions. 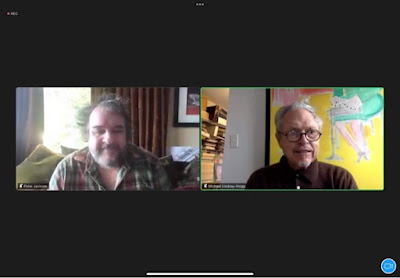 The highlight of the entire event was the Zoom discussion between Peter Jackson and Michael Lindsay-Hogg.   This is the one area where I feel that those of us with the virtual ticket got the best part of the deal.   We were able to watch this amazing discussion without the instruments from the bands or that annoying tall guy in the front row blocking part of our view.  It was quiet and you could actually hear and concentrate on what was being said.  Having watched films at Beatlefest in person in the past, I know seeing and hearing can be a challenge at times.   This discussion was amazing to say the least.

There was a lot of disappointment with the virtual attendees because Mark Lewisohn was listed as being a special guest and we were led to believe that we would be able to hear his two presentations on The Beatles in India.   Unfortunately, due to copyright material being shown, we were unable to see these presentations.   This was not known until we logged into the Main Stage Zoom to watch it and saw random fans jamming to Beatles songs.   And while I do agree, that Mark should not have been listed as a guest on the virtual ticket originally, I do believe that he made up for it.   Mark Lewisohn took the time to go to the virtual hub and spend a good amount of time answering questions directly from the hundreds of fans that were there.   So while we couldn't see the presentations, we did get a private Q & A that those in person missed out on.

Another virtual event that in-person attendees missed out on was the interview via Zoom with Michael Lindsay Hogg.  That was not something that was publicized at all and I am so glad that we stumbled into the interactive zoom room and saw most of it.

The music over the weekend was also really great.  I especially enjoyed the band, The Black Ties.  They performed on Friday night and sang songs The Beatles covered during the  Cavern/Hamburg days.  Laurance Juber (from the later years of Wings) as always did a wonderful set, Don from the Cyrkle's interview was so great!  And I was happy to hear him perform a few songs on Sunday night.   I have not always been a big fan of the Beatlefest house band, Liverpool -- but I really enjoyed the final Sunday night concert.

The one thing that I thought I would miss out on the most by having a virtual ticket and not being in person was the connection with other Beatles fans.   And while I really did miss seeing all my Beatles friends in person (especially when I was seeing them on my screen), I also enjoyed chatting in the Zoom chat with some new Beatles friends.   A big shout out to Edward, Ruthie, Nancy, Chris, George, and Annette!   It was great to make new Beatles friends!

If I was asked for any improvements, I would say that three Zoom links needed to be provided instead of the two.   One for the Main Stage, one for the interactive room, and another in the room where the panel discussions are held.   I missed out on a lot of great discussions because they were not showing that room.    I also think there needs to be a virtual schedule that is different than the regular schedule. Not knowing what they were going to show next, made it difficult to decide what to watch.

I also recommend that people attend The Fest for Beatles Fans and if you can go in person that is the way to go.  However -- I now will recommend that you get a virtual ticket if you cannot go in person.  It is well worth the money spent PLUS you get a week to watch it all over again and catch the things you missed.