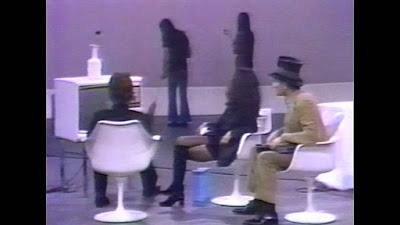 I have written about the live broadcast of the Yoko art show called "Free Time" before.   It was a television show of typical Yoko Ono art from that time.   The story I told about before was about a guy who fell off of a ladder during the "Flying" section.  You can read that story here.

Today is a happier story about a 16 year old girl who had the best Dad ever and got her in to see the show.  This story was found in the Instant Karma! magazine from February 1990 .

On October 11, 1971, I was lucky enough to be a member of the “Free Time” audience.  My wonderful father surprised me with tickets to WNET Channel 13 in New York City.  It was the first time I would see John in the flesh and I was ecstatic!  (A year later, my same wonderful father stood in line at Madison Square Garden while I was in summer camp and got me four 10th row center seats for the One to One concert.).  Anyway, on the day of “Free Time,” we went early hoping to catch John and Yoko arriving.  Sure enough, their limo pulled up and my father fumbled in his pocket for a pen and piece of paper.  Al he could find was his business card but that was the best we could do.  John and Yoko came out of the limo and I rushed over to ask for John’s autograph.  Then I went blank.  When J&Y went into the building, I asked my father “What happened?” because I honestly couldn’t remember.  My father said, “When you asked for the autograph John said, ‘okay’ then you spent the rest of the time staring down at your shoes.”  I was so overwhelmed that John had actually spoken to me and had touched my finger when I handed him the pen, that I broke down and loudly sobbed for at least 5 minutes.  I could not control my outpouring of emotion at having been so close to him.  (When I got home, I actually peeled off the skin on my finger where he had touched me, so I could always keep it.  Little did I know it was eventually disintegrating - I was only 16 years old!)

It was an audience participation show of Yoko’s art.  There was a nail hammering piece, a ladder you jumped off, a sliding pond, a canvas you wrote on, etc.  I was too shy to slide down the sliding pond or jump off the ladder.  My father said, “Sharon, John will catch you in his arms!”  But I didn’t have the courage to get so close to John.  I was a very shy teenager.  During the question and answer period – not that they really ANSWERED any questions – my father kept pointing to my head so they would pick me because I wouldn’t raise my hand.  I am the girl who stood up and asked John what was Yoko’s influence on his album, “Imagine.” After the show, we went down to the stage.  I got the sanitary napkins that John and Yoko had been wearing, vase pieces, and pebbles.  Years and years later I bought a copy of the video of that show from someone who ran a Beatle video newsletter.  He had not heard of “Free Time” but he finally found me a poor, edited copy with hardly any sound and a foggy picture and I’m not in it!  I’m sure that was the best he could find at the time.  I’ve never seen it on TV because it was broadcast live that night and I didn’t know about the rerun until kids told me at school the next day that they had seen me.