I stumbled upon an interesting documentary (if you can call it that since it is only 3 1/2 minutes long).   You can see it for yourself here.


The story is that on October 14, 1971, John and Yoko were on a television show called "Freetime"  This was on Channel 13 in New York, which was a public access program that focused on artists.   John and Yoko performed many of the pieces that they have performed during that time.   The one where a hammer is nailed, the one where they answer everything in question form and the one where people jump off of a ladder.  It was really avante guard stuff and I am not sure if anyone really understood it or if they just acted like they did.    The show starts with John being "born" out of a black bag and then he puts a kotex napkin (the kind with a belt) around his head (as if he had a toothache) while Yoko puts one over her eyes and she sticks another one in the host's mouth.

The focus of this little film is a man named Joe Badlotto, who was one of the participants in the ladder piece (called Flying).    The show's audience was by invite only, but Joe worked for a TV station at the time, so he could get in.   Joe was never a John Lennon or Beatles fan, but his girlfriend, Fran, was and she begged him to take her.   Being the good boyfriend that he was,  the couple along with a few friends that he sneaked in, all went to the taping.     Before the show, the friends waiting for John and Yoko to arrive and they took some pictures.


So the show goes along and John talks about the "Flying Machine" piece.   This is where a person climbs a white ladder and jumps off (to be caught by John!  Swoon!).   John demonstrates how to "fly." 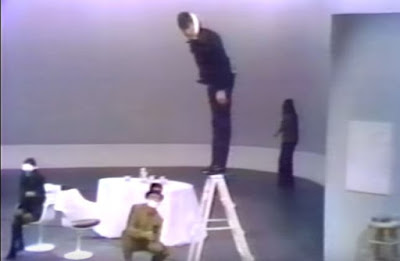 Then people from the audience begin to line up to climb the ladder and jump off.   So there they go---climbing, jumping into the arms of John and John saying something along the lines of "nice flight."   It was all pretty light stuff and even a little funny.    And who wouldn't want to jump and have John Lennon help them?   Yes please.

So Joe goes up and he climbs the ladder and then everything goes terribly wrong.   The ladder falls out from under him and he hits the floor below.    Watching the video makes you cringe.    John goes over to him and asks if he is alright.   Joe says no.   Then John helps him up and guides him off the stage saying, "take this guy to the hospital."


This show was a live television broadcast, so everyone watching saw Joe fall live on television, but as they say "the show must go on," and so the ladder was set back up again and John told everyone to be careful and the jumping went on for a little bit longer.

Meanwhile, Joe went to the hospital and his arm was badly broken.   He was in the hospital for several weeks.   He was told that he wouldn't have much use of his arm.      He was going through intensive physical therapy to get movement in his arm again.    During this time, Joe's girlfriend, Fran was trying to get a hold of John and Yoko to let them know what had happened.    Eventually a letter came addressed to Fran stating that when people are around John they get so excited, and jump around that injuries can happen.      Joe ended up suing John Lennon, Channel 13 and the owner of the building for medical expenses, but they had much better lawyers.

In the end, Joe lost 15% function in his arm and cannot straighten it out all of the way.

Should John Lennon or the TV station had been held responsible for the medical expenses due to the accident?   Or should Joe have known that when you go jumping off a ladder you could get hurt?   I am not sure, but I thought it was a very interesting little story.