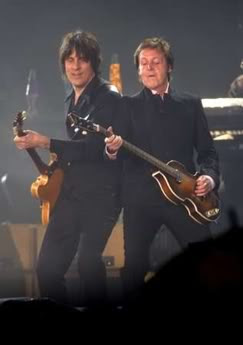 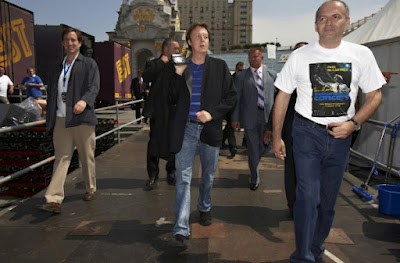 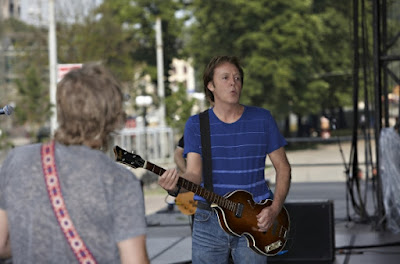 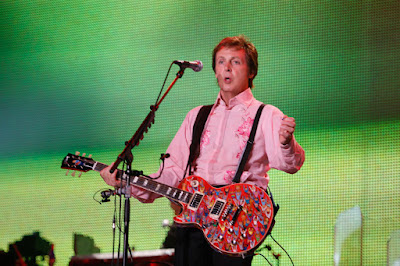 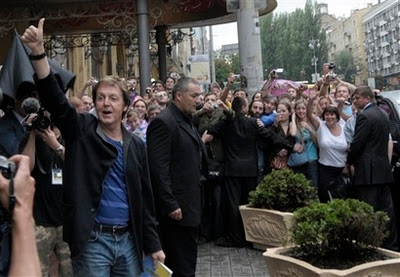 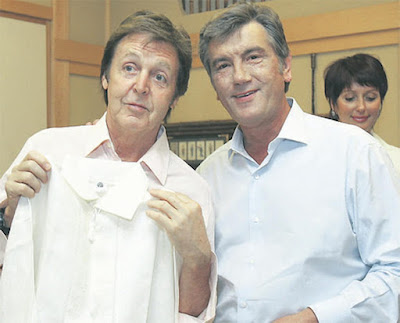 On June 14, 2008, Paul McCartney gave a free concert in Kyiv, Ukraine.  350,000 people showed up for the concert on the Independence stage.   Paul took the stage and greeted everyone in Ukainanian and then started singing "Drive my Car."    The show was live in Kyiv and 6 other major cities in the country had screens set up for people to watch a  live stream (did we call it that back then?) of the performance plus it was shown live on television!  The entire country was singing Paul's songs at the same time.
Before the concert, Paul met with fans.    A children's choir sang Beatles songs for him.  Ukraine has a Beatles fan club and some of the club members presented Paul with a kobza, which is a traditional instrument.   He was also given a shirt by the president, Viktor Yushchenko.
I  have been thinking about those Paul fans and the Beatles fan club of Ukraine a lot the past few days.  It is easy to think about people that live in a place that is going through turmoil in a country so far away as just "people."   But when I looked at the photo of Paul giving the thumbs up and the fans behind him are cheering and smiling, I connect to that.   They are my people.   I hate to think of my fellow Beatle fans suffering so much.
Anyhow--- here is what Paul posted today on his Instagram account.

Just as Paul says, I want all of the fans in Ukraine to know that I'm thinking and praying for them right now.
Posted by Sara S. at 11:36 PM