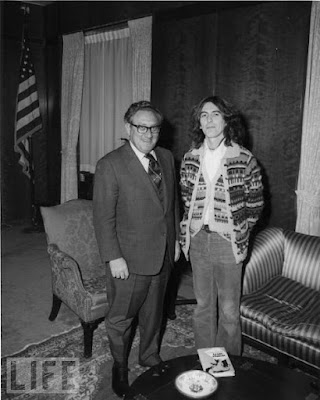 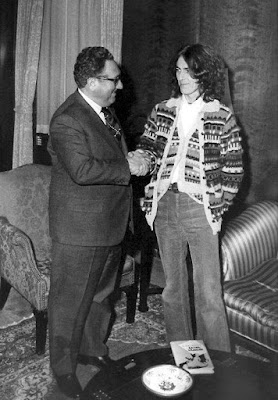 This is what George had to say in the December 1976 issue of Rolling Stone magazine about meeting Henry Kissinger.

"The meeting was very strange. I don't know if Kissinger wanted to see me, or if he thought I wanted to see him. Someone suggested going to the State Department instead of the Smithsonian aerospace industry, and I got this message saying that I should go meet him. in his office. He said he wasn't seeing many people these days because he was traveling a lot. I told him I was on a promo tour. He asked, "What's the promo? I said, 'Me.' Then he mentioned that he had met another one of the Beatles, but he wasn't sure which one, which was the one with a Japanese wife. 'Oh, it's probably John,' I told him. He had problems with Immigration. He asked me if I was having problems with Immigration and I replied: 'No, I still live in England.' I gave him a T-shirt from the tour and a copy of the "Autobiography of a Yogi", and he said goodbye."