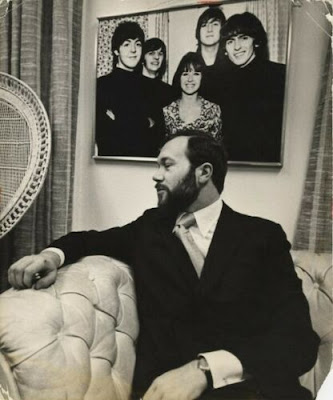 For as long as I have been a Beatles fan, I swear I have been trying to figure out information about this picture that hung near Derek Taylor's desk at the Apple offices on Savile Row.   Sure this is a nice enough photo of Peter Brown, but it is the picture above him that I care about.

I have never seen this photo outside of being in the background of photos taken inside of Apple offices.  This is the best version I have seen.    It appears to have been taken backstage during the 1965 U.K. tour in the Winter of 1965.   People have speculated that the girl is Maureen Cleeve, but I really don't think it is.    Again I will ask -- does anyone know anything about who is the photo, where it was taken and why it was hanging in Derek Taylor's office?