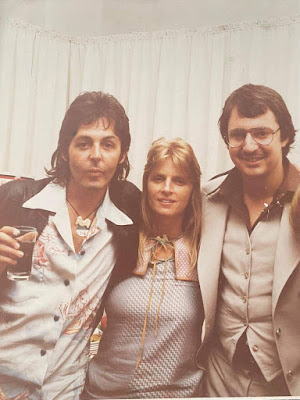 I found this photo and the following story on Reddit.  It was posted by NametheGames on r/OldSchoolCool    ( I do not know if this story is correct or not -- but thought it was worth sharing).

Myy dad went to see Wings during the Wings Over America tour in Toronto. His friend worked at a local radio station and had backstage passes. McCartney had actually recognized my dad as they briefly met a few months prior at some resort where McCartney asked my dad to pretend to be his manager (or something like that) to shoo away fans lurking in the bushes nearby. He also took a portrait of Paul and Linda which he has a print of and the film slide which I have been meaning to get transferred digitally.