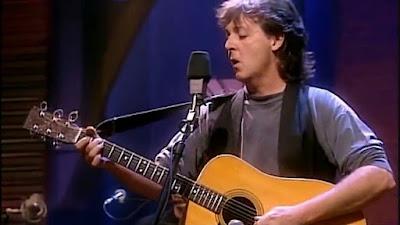 How many of you remember watching Paul McCartney on MTV Unplugged 30 years ago?    I don't.  My mom was on a kick of not letting me watch MTV because it was "bad."   Most likely something she had heard on a daytime talk show.  She has since apologized for not allowing me to watch Paul McCartney on MTV and I have seen the show and have the CD, so all is good.

I really enjoy this performance and I think Paul would do a great job bringing the Unplugged style back because he has so many great songs in that style and it would be less strain on his voice to perform in smaller venues.