If you Must Throw Things....Throw Kisses 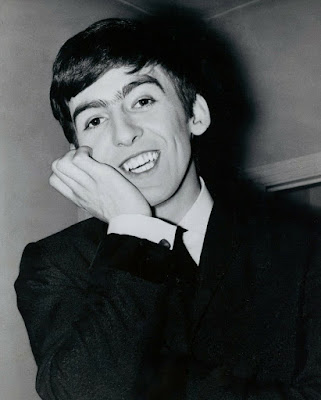 I hope you all have been enjoying the newspaper series from 1964 known as "The Beatles by the Beatles."  I think they are really funny.   Here is the last part -- George.

The Mad, Mad Beatles certainly enjoy being knockouts, that is, slightly more than sensational, because of the lucre, etc., but, as one of them, George Harrison, observes today, they don't like being knocked out by such tokens of esteem as a barrage of apples.  The Mops hope that they are pelted -- with kisses only.  Such are some of the thoughts of the shaggy-maned quartet in today's concluding articles.

You know, at first, I thought it was going to be a bit tough writing an article.  Well, I don't reckon myself to be a literary genius.  But having seen the load of old rubbish the other three wrote, I think this is going to be dead easy.

That drawing of me shown here was worth waiting for, wasn't I?  Well, I mean, you don't often see me like that.  (there is a cartoon drawing of George holding a guitar and pointing)

On the stage, I usually show just the top of my head.   It's not that I'm ashamed of my looks.  It's sheer self-defense.

Ringo mentioned it in his pieces, but I'd like to say again that we would all be knocked out if the fans would stop throwing things on the stage.  If they don't we're likely to be knocked out literally.  Some time ago an apple hit me right in the eye, and I had a shiner for a week afterward.

It's not really very hilarious.  So please don't throw things -- or, if you must throw them on John's side of the stage.  His head's tougher and a bigger target as well, come to think of it.  But seriously, please stop bombarding us.  It could be dangerous.  But if you have to throw something -- just throw kisses!

Apart from this one, hazard, life with the Beatles is really fab.  I can't think of anything I'd rather do than what I'm doing now.  It certainly beats being an apprentice electrician.  Touring, of course, is tough on you physically.  Sometimes you feel dead beat and you just don't feel like going out to face an audience. But once you get on the stage, the tiredness vanishes and everything is great.

How could anybody be unmoved with a couple of thousand fans clamouring and screaming?  Sometimes it's a job to hear ourselves play -- and I'm sure lots of people in the audience never hear more than a few notes.

John tells them to "Shurrup!" every so often -- for the sake of quiet ones in the theater -- but we don't really mind the screaming.  The kids have paid their money, and they're entitled to do what they want.

You see, the press has built us up a lot and, as we get bigger, and fans think we're getting farther away from them.  So they scream.  Some people say it's sexual, but we don't do anything on the stage to invite that sort of response.

Anyway, I can understand how the kids feel because I used to be the same way when I watched Eddie Cochran.  You know, if you dig somebody like mad on records and then you finally get a chance to see him in person, it sends shivers through you.

I don't know if that's what we do to our fans, but I know we send shivers through a few non-fans who think all Beatles should be crushed.  I don't mean people who don't like our music.  That's fair enough.  We don't like theirs.   But it's people who condemn us personally, people who dismiss us as a lot of clogs without knowing anything about us.  And people who reckon our success is money for old rope.

What we do may not be brilliant, it may not even be particularly hard work.  But hardheaded promoters don't' pay small fortunes to people who can't draw the crowds.

At the moment most kids seem to dig the Beatles.  Maybe this time next year we'll be on the way down.  That'll be a shame because we like popularity and the money.

But we're not going to turn up our toes and die if we're chased out of the charts by some group with the Leighton Buzzard sound or something.

If we were only in this business for the money, we wouldn't have lasted so long when we were getting 2 pounds a night.

But, of course, it's fab having so much money.  It's great to see an overcoat worth 25 pounds and be able to go in and buy it cash down.  A couple of years ago I would have had to save up for a couple of weeks and buy one for 8 pounds.

It would be nice to have more time to spend the money we're now getting -- to have more time to ourselves.  But on the other hand, we're not entirely prisoners of our own popularity. Not so long ago Ringo and I walked around Soho quite freely.  We were spotted, of course, but we weren't mobbed.  And in the evening I took a girl friend to a quiet pub in London.

Here again, people recognized me, but they left me alone.  They were mostly adults, of course.  But, even so, teenagers only get frenzied if they are in large groups.  in ones and twos, they're more subdued.

I don't really miss the privacy of being unknown very much.  But what I do miss is driving.  Nowadays we are driven everywhere.  I'd love to own a racing car -- not necessarily to race it myself -- but just to be in on the racing scene.

Another ambition of mine is to own a big house somewhere where it's red hot for most of the year.  The house would be by a big lake or by the sea so that I could swim and water ski.

As for musical ambitions.  Well, of course, I'd like to hear John sing in tune.  And I'd also like to become a really good guitar player.  I paid two pounds for my first guitar and practically ruined my fingers on it.  I picked up ideas from guitar tutors and from other guitarists, but I'm still a long way from being as good as I'd like to be.

When I was in the Canary Isles a Spanish guitarist taught me a Segovia piece.  It was marvelous.  And I'd love to be able to play Spanish guitar -- you know, where it sounds like eight people playing at once.

Since then I've been trying to find a really good Spanish guitar.  I've got about four guitars at the moment.  and the best one is worth about 250 pounds.  But I don't get enough time to practice.  And, when I do, I find myself playing the same old thing.

But more than a Spanish guitar, I'd like a steady girlfriend.  You know, it's a bit of a drag when you've got a day off and no one to go out with.  I like all sorts of girls, so long as they know what's going on fashionwise and as long as they're not absolute clogs.  You know, soft.  They don't have to be intellectual.  Just with it, you know.

But, really, when people ask me, what my ambitions are, I can't give a direct answer.  Things happen so fast.  I year or so ago my ambition was to make a record -- not necessarily a hit record but any old record.  I just wanted someone to let us into a recording studio for an hour or so.

Today?  I don't' know.  I'd be knocked out if things just carried on as they are now.  Apple excepted, of course.