The Beatles: Ringo's Starr's Own Story 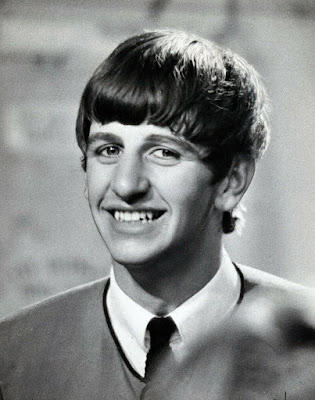 I am going to share the four-part series knows as "The Beatles by the Beatles Themselves..." by Universal Press Association.   These articles were published in various newspapers in 1964 or could be ordered and send to your home for fifty cents.   Imagine that you are a young fan in 1964 and you get these articles.  You believe that the Beatles actually wrote these articles and you are excited to read the information.    I have the four articles in a very cute scrapbook that was put together by a fan in 1964.   I am sure she was thrilled to paste these into her book.

The Beatles:  Ringo Starr's Own Story

Meet the Mad Mad Beatles, in particular the one with the Big Nose who calls himself Ringo Starr, but whose given name is Richard Starkey.  He's looking for a steady girl.  What will she be like?  Here is what he wants, told in his own words:

I'm the small one with the big nose.  They're always pulling my leg about my nose.  And because I'm only 2 ft 9 in (actually 5 ft 8 in) they introduce me on the stage as the Midget.

I'm also the oldest one - 23, Middle-aged, really.  But if anybody asks I always say John's the oldest because he looks so much older.   I mean he could be our father really -- if he was a bit better looking.

It doesn't seem that only a short while ago we did the Royal Variety Performance.  It was great meeting all those people, like Marlene Dietrich.

People said to me, "Didn't you feel embarrassed among all those experienced performers when you've only been in the business a year?"

Well I suppose we were a bit embarrassed.  But it's not up to us.  What can we do?  We were a bit nervous well, we just went on and did what we always do and they seemed to like it.

I know we're always making cracks about being simple, unspoiled lads.  But honest, all this rush of publicity hasn't made us any different.

We still get a great kick out of seeing our names in the papers.  It's not so long ago that we had to struggle to get a line in the paper.

It's great while it lasts -- and we all know it could all end in a year, or even in a couple of months.

It's fabulous to have so many fans, even though it means that we're prisoners in every theater we play.  I see that some people have been saying that we're a burden on the police and all that.

But the police don't seem to mind.  When we played at one town, a police sergeant told us that every copper in the station had volunteered for the job of getting us in and out of the theater.

People say it's a waste of public money --  but if the police weren't there it would cost a fortune in hospital bills.  The fans are really wonderful but sometimes they get carried away.  When they start showering things on the stage it's a problem for the boys in front.

We've only got to say we like miniature cars or hard candies and we get them showered at us on the stage.  That's why I've given up liking eggs.

And if they must throw the candies I wish they'd take them out of the tins first.  It was the same with jelly babies.  One of us said we liked them and now we've got enough to last us until 1967.

This tour we're doing at the moment is great.  In every other group I've been in there have always been arguments.  But this is a very happy group.  We always end up together even when we're not playing.

The only thing I miss is having a steady girl.

I was engaged to a Liverpool girl three years ago.  It lasted a year, then we broke it off.

I've got a few girl friends in London and Liverpool but at the moment I don't' get a chance to see them. And though I love the fans, there's not much enjoyment in going out with them because I always feel they're with me because I'm a Beatle and not because I'm Richard Starkey (my real name).

But I'll tell you the sort of girl I like.   I like them to be shorter than me, for a start.

The color of their hair is unimportant, but I can't stand girls that wear jeans when they are not built for them.  Very few girls are.

They should have some intelligence. They don't have to be intellectual -- I wouldn't understand what they were talking about.  But I don't like them to be thick.  I like them to do a lot of talking because I'm no good at it.

I've got no plans to get married at the moment., but I'd like eventually to settle down with a wife and have a couple of kids.  The best age for marriage?  There's no best age.  But I don't think you should wait until you are 29.

My future wife will be someone who can cook good plain meals.  I'm very fussy about food.  Can't stand onions.

I suppose what I like most of all in the world at the moment is playing drums.  I started playing about five years ago and I think I'm better than I was.  But I don't' do anything technical.  Just off-beat stuff. I can't stand rock group summers who play modern jazz.

I can't read drum music.  It would help if I could. I suppose - but I like working things out for myself. I keep the arrangements in my head.  This way, of course, I sometimes make mistakes  -- you know, your attention tends to wander when you are playing the same numbers over and over again.

My favorite drummer in Britain is Phil Seaman -- but there are lots of American drummers who are great.  The drummers who play with groups like the Shirelles, for instance.  They knock me out.  They do such fab bits.

One thing I miss in the music business is getting home for Christmas.  I haven't spent Christmas at home for the last three years.  I love Christmas.  It's a fab time.

My mother -- she used to be a barmaid- and my father (he's a painter and decorator) have got used to not seeing much of me.  But being an only child I'd like to make it this year if I can.

It's a long time since I spent a quiet evening at home.  and I love that.  The only chance we get to relax now is going to night clubs.  But I love being at home and playing records, watching TV or reading science fiction.

Cinema?  I like Glenn Ford, Paul Newman and the Method school.  But there won't be much Method about our film -- mostly madness.

I shouldn't' say this -- being the newest member of the group (I joined in August 1962) - - but the other three are all potty.  They only asked me to join because they had to have one good looking one.

But joining the Beatles was the best thing I ever did.  Don't' ask me how much money I'm earning.  I haven't a clue.  It all goes into the company.  We just get pocket money -- quite a lot of pocket money.

It's a bit different from being on the dole - as I sometimes was a few years back.

And if it all ended tomorrow? Well, I think I'd do what I've always wanted to do.  Open a ladies' hairdressing salon.