I'm the Beatle with the Baby 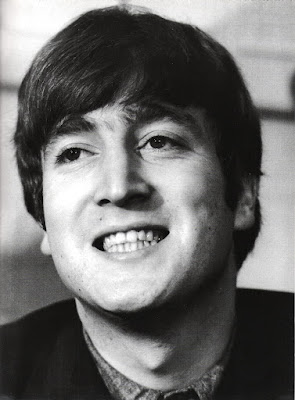 This is the John Lennon part of the newspaper series from 1964 called "The Beatles --  by the Beatles themselves."   Remember that this is written as if John himself wrote it.   I found it glued into a scrapbook I purchased.

Ask yourself who is the most cultured, mature, artistic, married, short-sighted member of the Beatles ... and the answer's a Lennon.

A lot of people thought that when the news got out that I was married and had a six-month-old son, it would be professional suicide.

But they were so wrong.  The fans were simply wonderful.  I know that you're always supposed to say: "My  fans are just wonderful."  But I really mean it.

When they heard I was married, they wrote me hundreds of letters saying, "I like you even though you are married." And they sent dozens of presents for my son John.

Now I know I can afford to buy him all the presents he wants, but getting them from the fans was great.  It really made me feel good.

We all realize that there is a danger that because of this fantastic fan worship we might get to think we're supermen or something.  But when I feel my head starting to swell I just look at Ringo and I know perfectly well we're not supermen.

But I'd be a liar if I didn't tell you that we love all the publicity we're getting.  Go on, admit it....you wouldn't mind getting your name in the papers either, would you?

What I can't stand is people who write in to the papers saying that one week's wages for The Beatles would build a church in Africa.  And they moan about all the uproar and inconvenience we cause in various towns.

But I hope we give more enjoyment to more people than any church in Africa.  As for the inconvenience -- well we don't' want to create it.  We don't have people going round shipping up support and hysteria for us.

Still, I suppose that having had all the favorable publicity, it's now getting round knocking time.  We don't mind people putting us down -- we enjoy reading the carping comments as much as the friendly ones.  But there are always a few who feel they have to do their bit for society as an evil influence.  Then there were the veteran musicians who say to each other, "Never mind, Bert, we'll still be playing long after this lot are finished."

Well, we don't profess to be brilliant, musicians.  But the kids don't want brilliant musicians.  I'd be the first to admit that our success is out of all proportion to our musical talent.

But we don't pay the kids to queue up for days to get tickets for our shows.  So I suppose we must have something.   One thing I know, we've got is mutual understanding.  We were all friends before we started playing together.  And we're individuals too; that's why we don't' have a leader.

The only thing I was interested in as a kid was art.  My math teacher once wrote on my report:  "He is on the road to failure if he carries on like this."

Well, I carried on like that, and believe me, failure is great.  I met my wife at art school.  We met over a pot of paint, I hope my son will turn out to be artistic, too.

I'd really like to spend more time with my wife and son.  I try to get home regularly, but it's difficult.  I had an idea at first of being a wandering minstrel, taking my wife with me.  But it doesn't work.

So now she stays with her mum in Hoylake.  I'm not hiding her from the public.  But I have tried to keep her away from the press.  I don't see why they should treat her like a freak just because she married a Beatle.

What does she think about my being away so much?  Well, she knew what it would be like when she married me.  And she's very understanding about it.   I phone her nearly every day although the telephone is a horrible means of communication.  Voices mean so little without the expression and gestures that go with them.

The thing that bugs me most is life is being shortsighted.  I've been that way since I was ten.  The other boys call me four-eyes whenever we have a mild shout-up in the dressing room.  But I hate having those horn-rimmed things hanging on my face.  The other boys have fun telling me the wrong door to go through when I'm not wearing them so that I finish up in a cupboard.  But I  haven't yet spoken to a poster.

By the way, all this talk about being fed up and frustrated because we are prisoners in hotels and theater dressing rooms is a lot of nonsense.  One of the great things about being one of the Beatles is that we have so much fun offstage.

We're always clowning about.  In Sweden, George took a film of me with his cine camera while I joined various groups of passers-by and started grinning and muttering to them.   When they spotted the camera they tried to get away because they thought they were interfering with the film.  But I just followed them and they couldn't understand it.  It was hilarious.

What I'd really like to do is to write a musical with a lot of our humor in it.  I get more fun out of writing words and music than from being on the stage really.   The only trouble is that I'm dead lazy.  Not that I count that as a falling.  It's a blessing really.

People are always asking me what accounts for our success.  I haven't the faintest idea.  If anybody really knew just what made us tick I suppose they'd be forming dozens of identical groups.   I mean you could tell four guys to play like this, dress like that, talk like this, play like that -- and it just wouldn't' work.

The next thing we'll get is stories that we're either cracking up or splitting up because we love what we do and we'd go n doing it even if we couldn't afford silver-plated yachts.

As for splitting up -- well we all know that one Beatle is no good without the other three.  I tried singing on my own once, and I never felt so soft in all my life.