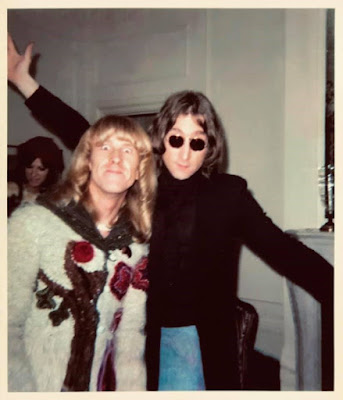 Here is what Davey Johnstone wrote on December 9, 2020 about playing with the Elton John Band and that famous Thanksgiving night in 1974 with John.

The Elton John Band were fortunate to spend time with John in the mid-‘70’s culminating in him joining them on stage at Madison Square Garden, NYC on the 28th of November 1974. It would be his final concert performance.
Even after all these years, the memories of that unforgettable Thanksgiving night continue to reverberate and inspire awe among Elton’s team. At 7pm GMT today we will be posting a video about that special night which features contributions from Elton’s team (including Davey.)
We also wanted to share this very special photograph of Davey with John which was taken at the party after the concert. We love you, John

[Photograph property of and courtesy of Davey Johnstone.]
Posted by Sara S. at 9:35 PM