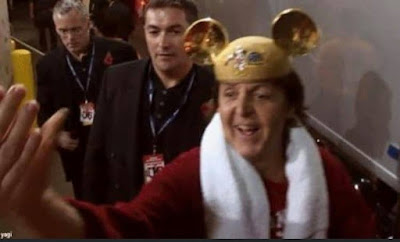 In 2005-2006 Disney Parks were celebrating the 50th anniversary of Disneyland.   It was called the Golden celebration and all sorts of "golden" things were on display and sold at all of the Disney parks around the world.

Some Paul fans went to Disneyland in California in November 2005 before the Paul McCartney concert in Anaheim.   They bought a pair of golden Mickey ears and had "Paul" stitched on the back.    Toward the end of the concert,  one of the fans tossed the ears up on the stage and Paul picked them up and put them on.  Goofing around, he put them on Abe's head for a little bit, before putting them back on.  He wore them as he left the stage, as you can see here.

The fan was wearing her black Mickey ears and Brian Riddle saw her and made a symbol like Mickey ears above his head.