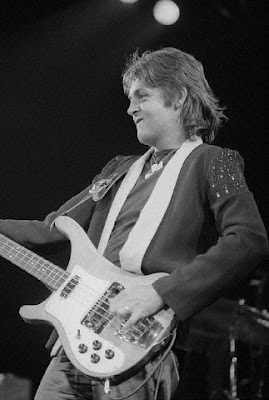 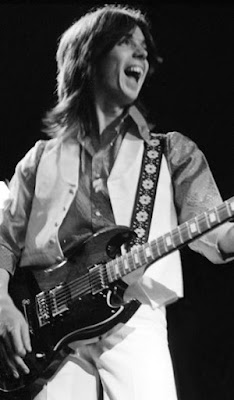 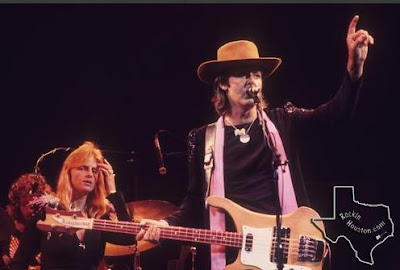 The continued story of Doylene following Wings on the Over America Tour of 1976 from the May/June 1976 issue of McCartney Ltd.

Luckily, the next morning, Cindy was able to find a late flight out of Houston for us with the help of a travel agent, but we had to change planes and couldn't get one later at 11:00 which meant we'd have to leave the concert early, but that would certainly be better than missing it altogether, so we were on our way.  We arrived in Houston just shortly before the concert was to began so we grabbed a bite to eat and some film and then made our way to the Summit.  the three of us were among the last in but somehow we ended up in front of the center stage anyway, so for a while at least after the concert started it was absolute heaven.  I was separated from Mary Ann and Cindy almost immediately by the pushing crowd but luckily the direction I was pushed was close and closer to the stage, so I ended up with my position during the first set with PAul on bass but then things started getting crazy and I was nearly killed but those first few songs were worth death.

This is where I really noticed how slim he'd gotten and how good his hair looked -- longer on top with it cut just above his ears on the side and touching his shoulders in the back.  He was wearing another new outfit, same pants, but this time with a long-sleeved suit length black jacket which had gold (and silver) sequins across the shoulders, pink satin lapels in the front, and a black knit top underneath.  Plus around his neck was a were a Sings and a Speed of Sound necklace.  I only had the opportunity to take about 18 photos before my arms were pinned down by the very enthusiastic crowd but what I got for fantastically close including a couple of him looking right in my direction.

Then it was mayhem!  Paul asked if we were having a good time once and I gave him a dirty look!  Then Denny and Jimmy finally asked the crowd to move back, but of course, no one paid any attention; not even when Paul later repeated the request himself.  I also remember yelling "YES" when Paul came to his "does anybody know what a rhythm box is" line but if I'm lucky that was lost in the roar of the crowd.  I really remember visual things from the concert much more than audio, probably because I was lucky enough to get so close for once.  So forgive me if that's what I've tended to dwell on here.  I had to start making my way out of the crowd during "Magneto" or "My Love" bu that was a long tedious process so it wasn't until during "Time to Hide" that we actually went walking out of the building.  I finally got to the lobby and walked the length of it a few times before Mary Ann and Cindy and I finally found each other!  It was so hard to walk out just before "Beware my Love" but at least we'd gotten to come and see most of the show.  Finding the car (where our suitcases were) in that maze of a parking lot was another nightmare though nothing compared to what lay in store for us at the airport.  Between having to go thru security 100 times and fighting with people and forgetting my suitcase on the first plane after it was already locked up, the trip home was a real barrel of laughs.  We couldn't believe all this crap actually happened to us in one night, but as always, looking back, it was worth it...but never would I have gone through it for anyone else!