Onto Cardiff and Bournemouth! 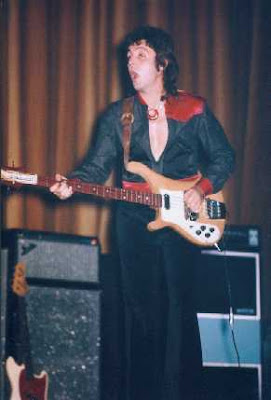 Continuing one with the journey of the Americans following Paul McCartney and Wings around the U.K. in May of 1973 from the Summer 1973 issue of McCartney Lovers and Friends

Now, onto Cardiff.  Would you believe we had to stop off in Bristol again to catch a connecting train?  Anyway, we finally did make it to Wales and registered in a hotel right across the street from the theatre.  You had to lean out the window to see anything, so while I was writing a letter, I kept sticking my head out the window every two seconds.  All of a sudden I saw the bus (arriving hours ahead of time for rehearsal) and naturally I missed Paul by a split second.  I saw everyone else going in, but brother!  We met a friend for the first time outside the theatre and since then, we become traveling buddies and went nuts on the train together.   She and Maddy and front row seats and our seats were awful.   They were off the side, and not being six feet tall, I was having a hard time seeing anything.  I was having a nervous attack when Ann spotted two beautiful, gorgeous empty seats in the second row - center!  Luckily enough, we snuck over to them about 10 minutes before Paul came on, but God, we were so nervous that the proper owners would show up and kick us out.  John Eastman was sitting right near us.  The show was great, and I loved our seats.  god lots of nice looks from Mr. Mac, which didn't bother us at all.

At the end, when everyone was up, Ann and I decided to make ourselves noticeable and stand up on our chairs.  Well, it worked!  Especially when we both fell through the seats at the same time!  It was so funny!  We were both dying from laughter that we hardly noticed the pain.  I pulled a cutie and tried to get back up on the chair, and leaned all my weight on the let that was stuck behind the chair.  I was sure that I had broken my ankle.  I had a black and blue mark half the size of this page which didn't go away from about 5 weeks.  In order to balance ourselves, we threw our shoes off.  It was hysterical, really.  We kept having visions of Paul seeing our heads and then all of a sudden "where'd they go?"  Ann got stuck so bad that she just let her foot stay behind the seat and danced on her one remaining foot.

Guess who came and sat in these3ats were ere so happy to give up?  Mary McCartney and Paul's manager, Vincent Romeo (They say she fell asleep during the show).  Mary was right next to Sher -- so Sher was happy.  We went to the stage entrance behind the theatre, where the bus was.  Linda stuck her head out and throw some frisbees.  Oh!  I almost forgot -- at the end of each show, the roadies would come and throw hundreds of frisbees into the audience and at times, Paul would throw them too.  They were blue and red and said "Paul McCartney and Wings  -- Red Rose Speedway".


Anyway, the bus went out to the front entrance.  the night before in Oxford, I asked Linda where the kids were.  She told me they'd be there, and sure enough, they were!  When Paul came out, he was swarmed again, and yelled, "Dave!!"  He looked at Ann and rolled his eyes as if to say, "their assholes..."  Vincent was carrying Mary and everyone was pushing.  Some nut was heading right toward Mary, so I pushed him away from her and said, "Don't push!"  Mary was SO CUTE.  She looked at me with the cutest little smile.  I could kidnap that kid.  We went over to the side where Paul was .  Linda was sitting at the window and someone gave her Stella.  Linda waved and then started Stella waving at us.  this went on for 10 minutes.  Stella is so cute -- she's got his features in her coloring.  She was so cute and happy, waving to us and we kept waving back.  It was hysterical.  We just kept waving on and on for 10 minutes!  Paul was devoting his attention to the hysterical side of the bus but were having all the fun with Stella and Linda.  Mary was next to Paul and all we could do is drop our mouths as we compared profiles -- exactly alike.

Finally, Paul decided to give us poor creatures standing over there alone some attention and waved and gave the thumbs-up sign.  Stella was still waving at Sher, Ann and I and Paul noticed and starting singing to her.  Ann swears he said "You're a bad girl" because she read his lips.  He was waving and smiling and gave some mucho nice looks.  After the bus left, we went back to our hotel and the owner opened the closed bar for us so that we could have some drinks.   Ann and Sher and I had a little theme song going, which went to the tune of the song Paul sang at the end of the special (before Yesterday) "so here we sit at the end of another day, end of another day..."  Our words were "so here we sit at the end of another concert, end of another concert...

Bournemouth is on the southern coast of England -- on the English channel.  That was the most beautiful place I had ever seen.  It was incredible -- very clean, parks with gardens all over the place and water was nearby.  It was gorgeous.  If you ever go to England, plan that as one of your stops.   One of their restaurants had the best lasagna in the word (and by the way, John Aunt Mimi lives there).

We were there for a total of 2 days since there was a day off.  We went to the Winter Gardens early so that we could take some photos of the theatre as well as the surrounding area.  Sher and I were taking photos of the front when we noticed this person on the roof.  It was Henry, who was practicing on his guitar.  There were some nice guys around who wanted to get some photos of Paul -- later on, they were talking to Henry and Henry said that once Paul arrived they, including me could go backstage, providing it was alright with Paul.   Naturally, Paul arrived too late, so that flopped.  Anyway, we sat around and waited a few hours.  I had gotten some yellow roses for Paul and the bus arrived.  It was only us, and Denny Laine spotted us and therefore, proceeded to stand up and wave and smile.  Paul noticed us, and jumped up and started waving and grinning and before long, everyone was waving at us.  I went around to the side where Pau was because they were opening the gate for him and he followed me around to that side.  He was smiling and I held the roses up and he went "Oh!  OK!" nodding his head.  I pointed to the front of the bus, and he nodded his head ok, so I went to the front to meet him.    I had this big plan to ask him to sing the "Hold me Tight" medley.  He came off the bus, looking like a little kid at Christmas time.  He had this huge grin and an expression like "ok! Can I have my flower now?"   I handed him the flowers and said "They were living once"  (they had sort of wilted during out vigil).  He said "Thank You" and walked in, so I never did get to ask him about that song.   It's better that he never did sing it because, with those words, we would not have been responsible for our actions.

We had second-row center seats that night which were fantastic.  I was talking to this particularly gorgeous guy next to me before the show.  he couldn't understand what we saw in Paul that would make us follow the tour around.  Well, after the show, all he kept saying was "Now I know why you're doing this!  Fantastic!  Absolutely fantastic!  That was the best show I ever saw!"  When the show began, I immediately had a heart attack when I saw my flowers sitting in Denny's drums!  The show went along beautifully, as always, with a lot of special attention from Paul.  At the end, however, the stage got rushed and we just about died.   Something like that makes you want to run up and punch those silly people.  Paul saw it coming, dropped everything, and ran like hell!  I was so frightened my heart was in the my throat.  When they cleared everyone off, he did come back out.  Linda was so scared that a roadie put his arms around her as if to protect.  She put her hands over her face and she was crying. I really felt sorry for her -- that really scared me too!  None the less, it was a good show, except for that scene near the end.

We waited near the stage door and were joined by 100 other people, so we separated ourselves from that.  We were very tensed up and afraid of what would happen when he came out.  As usual, he was swarmed, flashed at, and had to sign a lot of autographs and smile at the same time.