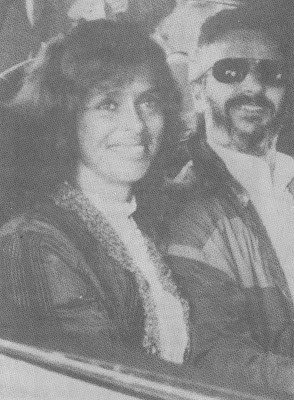 Ringo and Barbara flew into Sydney (Australia) on September 28 (1982).  They had come specifically to record a TV interview with Michael Parkinson for the "Parkinson in Australia" talk show.

All three commercial TV networks featured the arrival on their 6 pm news and I saw Ringo signing quite a few autographs and posing for photos for fans.

The Parkinson Show aired on October 9th.  There were three guests on the one hour show -- Ringo, Barbara and Glen Sharrock (former lead singer with Little River Band).  Ringo and Barbara were on the set for the entire show.  Sharrock came on about 2/3 way through.

Parkinson introduced the show with a montage of Beatles film clips set to "Love Me Do" in celebration of that song's 20th anniversary of UK release.

Ringo was n fine form coming out with great one-liners and not taking a minute of the interview seriously.  Parkinson asked, "When did you (Beatles) first realize that you were something special?  Ringo: At birth!

When Barbara answered that she hadn't seen any of the Beatles films.  Ringo chipped in, "No matter how many times I put them on."

A little known fact emerged when Barbara was asked about her children.  Her son Johnny is normal mentally but has deformed legs.  Barbara explained that he is soon to have an operation which they hope will straighten his leg bones.

Parkinson mentioned that both he and Ringo had been asked by the Variety Club to donate items to be auctioned for charity.  Parkinson said he was donating one of his books and asked Ringo what his contribution would be.  On the spur of the moment, Ringo whipped off one of his socks, paused to sniff it -- "Ah, roses...!" --and offered it to Parkinson.  When asked about the other sock, Ringo replied, "only if you donate another book."   The deal was made and off came the other sock.  Parkinson suggested the money gained from the auction should go to spastic children welfare groups, much to Barbara's approval.

The show ended with Ringo being coaxed into performing with Sharrock and his band.  They launched into "Honey Don't"  but Ringo's nervousness got the better of him.  He refused to sing and dropped a drumstick twice.  As the song finished, Parkinson led Barbara over to the band to do the thank-yous and close.  The band then went into an encore of "Honey Don't."  This time forming a medley with "Blue Suede Shoes."  Ringo had relaxed by now and settled down to his drumming, enjoying himself, even singing along here and there, as Barbara danced around his drum kit.

It was originally reported that Ringo and Barbara were to stay in Sydney only for four days before leaving for the U.S.  But I recently heard they had a brief holiday on Heron Island in the Great Barrier Reef the following week.  They must have been talking with George!

In an article in an Australia newspaper, Ringo's current home life and future plans were discussed:

"Last October Ringo and Barbara moved back to Britain where they live in a 26-room Berkshire country house.  His return to England marked the end of a six-year tax exile for Ringo.  And he admits that the move from California is costing him a fortune in taxes.  But he says, it is worth it.

"I feel safe and comfortable in England, and Barbara loves Europe.  I've spent six years traveling around the world, and never stopping for more than five weeks in any one place.  After a while, it's no fun.  I bought the house in 1970, while I was in exile.  I didn't own it, but I have it back now.  Barbara and I have changed it and it's a warm, loving place to live.

Now there are rumors that Ringo may play the lead role in a film turned down by Adam Ant.  The movie is "Yellow Beard" and scripted by the former Monty Python writer Graham Chapman and is a comedy about a pirate.