Tales from the Nosebleed Section of a Paul McCartney concert. 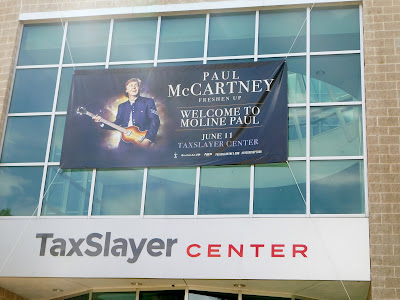 Over the years I have informed you all about my experiences at various Paul McCartney concert events:  soundcheck, third row, limo watch, etc.    My reasoning was to give fans the information to make the right decisions for them.   I have heard of the years that it has been helpful to many fans, and so tonight I am going to explain what it was like seeing Paul in the nosebleed section of an arena.

Paul McCartney concert tickets are expensive.  That is a fact that no one can disagree.   The tickets at the top of the arena (known to most as the nosebleed seats) cost in the $100 range.    There are a lot of people reading this that don't have an extra $100 laying around.   When you add up wanting to take your husband and kids or whoever else, it gets expensive really fast.      Is it worth buying the tickets in the "cheap" seats just to be there or is it not worth the money?

I saw the Paul McCartney concert in Moline, Illinois on June 11, 2019, from section 204.   I was very close to the tip-top of the arena.    I have had floor seats and I have had the middle section, but this was my first top tier concert since 2002.     The biggest thing  I can say is that if you are on the floor, you are PART of the concert.   Paul makes direct eye contact with you and those around you.   He is reading signs of the people there, you might get on the big screen during Hey Jude, etc.    If you are sitting at the top, you are an observer the entire time.    There is a big disconnect between you and Paul.


It is difficult to get to your seat up at the top.   The incline is steep and the stairs are a little frightening for some.   The seats are tight together and there isn't much wiggle room  (although the same can be said for seats on the floor).    Once you get to your seat, it easiest to stay there, but tons of people will be getting up and leaving to get beer throughout the show, causing you to have to maneuver around to let them through.

The folks that are with you up at the top don't seem to be die-hard McCartney fans.   They don't react to Wings or solo songs and let's not even talk about the brand new stuff.   If they aren't reacting to "1985," then they sure aren't going to react to "Who Cares."     The fans down below are doing specific movements during certain songs (Roll it comes to mind, but there are others).    If you are doing these things, you are out of place.   These people just want to hear Beatles, and not any deep Beatles cuts but the #1 hit songs.    Not that there is anything wrong with that, but if you think you'll pull from their energy, you are wrong.   That is not to say that there aren't any serious fans up there -- but the majority at my concert were not.

The good part is that you can hear Paul no matter where you are sitting.    You can also see him (that is as long as someone isn't blocking your view).    The big screens on each side of him (and the little ones for those with an obstructive view)  make sure that you see him very well.   Without those, he looks like a teeny tiny Paul McCartney -- but you can tell without a doubt that it is him.   The viewpoint from the top is interesting and one you don't get elsewhere.   I could see him entering the stage and other "backstage" stuff going on.    You get a very good overview of the stage and the entire band.

If you want to see Paul McCartney and the top tier is what you can afford, I will say that you should go ahead and get them.   If you have mobility issues, make sure you get there plenty early because it would be almost impossible to get up the steep steps if you need any assistance with a cane or someone's hand in the dark.    You will enjoy the concert and you will see and hear Paul, which is the reason for attending.

However, if you can afford the $150 seats in the first tier, I think you'd have a better time overall.  Not only is the view better, but the energy from the fans around you makes the show a blast.