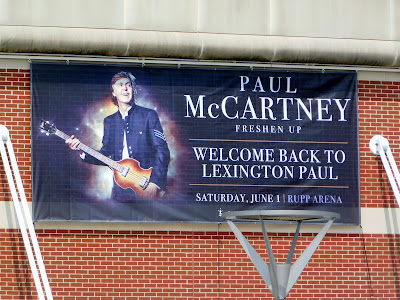 On June 1, 2019, I had the opportunity to travel to Lexington Kentucky to see Paul McCartney in concert for the first time in almost two years.   His new tour, which has the silly name "Freshen Up" still has a few more dates left.

One of my best friends from college lives in Lexington and according to her, having Paul McCartney perform in their town was the most exciting thing that ever happened in Lexington.    The city was pumped for the show with radio stations and TV channels broadcasting.    There was definitely "Beatle energy" in the air.

The concert was held at the Rupp Arena, which had a lot of construction going on around it.   It is a strange venue that had an entire food court located underneath the arena.   I was told that it held several smaller arenas where a variety of sports and performances take place during the year.   Due to the construction and setup of the place,  most of us fans could not find where the limo watch was happening.  While we were looking for it, Paul arrived and was inside.  Oh well -- so much for that.


I have to say that I had the BEST seat I have ever had for a Paul McCartney concert.  While I wasn't on the floor,  I was dead center and had a wonderful view of Paul the whole time.   The people around me were all having fun (passing around popcorn, swaying together...it was a great time) and there was a wall behind me, so I could sit on top of the fold-down seat if I wanted.

D.J. Chris got everyone in the mood with a great McCartney/Beatles mix then there was the video that showed a few rare photos of Paul from when he was young to today.    This was a new version of the pre-show compared to the last tour.

Not many things on this earth are as exciting as the moment Paul McCartney takes the stage.  As he came on stage, he started in on "A Hard Day's Night." Paul was wearing a navy blue jacket with the "Egypt Station" symbol on the sleeve.  He had a light blue shirt underneath and dark blue pants.  Paul looked good with his natural grey hair.  The next song he launched into was "Junior's Farm."  I was very happy to hear it because it is one of my top favorites and I hadn't heard it live in many years.   After that, was one of my least favorites, "Letting Go."    While I personally don't care for this song, I was blown away (pun intended)  by the small horn section.   The three guys were in the audience on this song but joined Paul later on MANY songs on stage.   Their energy and sound added so much to this concert!   I am not sure how much of the concert was "Freshened Up,"  but the brass section really took the concert to a new level.   It was a welcomed addition. 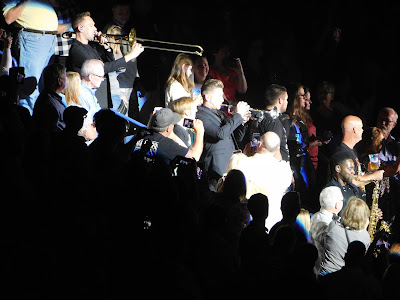 Paul continued on, performing many of his solo, Beatles and Wings hits.   Song highlights for me included "Let 'em in"  (the flute part was done by Paul and Abe whistling!),  "In Spite of all the danger,"  "From me to You,"   "Dance Tonight"  (Paul plays the mandolin and Abe's dance moves are great!)  "Let it Be,"  "Here Today,"  &  "Fuh You."


The new songs were well received by this audience.   Even though I could tell that many of the people around me didn't know the new numbers, they were still clapping and swaying to the music.  Before going into "Fuh You,"  Paul went into his thing about how he can tell what songs people like because if it was a Beatles song, the place lights up with everyone's phones, but if it is a new one, it is like the black hole.   Well---during the song thousands and thousands of people turned on their phone and waved it back and forth.  Showing Paul that his new song doesn't need to be a black hole.  We all approve of it.   Paul was obviously touched by this.   Not only did he thank everyone for the lights and said with a warm smile how we proved him wrong.

Paul was really chatty during this show.  He told his usual stories but also read many signs and talked more than normal.   Paul's voice was not too good at this concert.   He strained to sing songs such as "I've got a Feeling,"  "Maybe I'm Amazed" and "Helter Skelter."    He took several drinks of water during the show, which should not be noteworthy, but Paul used to be known as the guy that never drank water during a concert.    I never understood why he didn't drink anything all these years, to begin with.    I also noticed that he flubbed some of the words on Sgt. Pepper Reprise.    Paul seemed to be enjoying himself, but this particular concert wasn't as tight as previous performances.

Two songs were missing from the setlist:  Band on the Run and Yesterday.     It appears that Yesterday has been removed from this tour altogether.   I am not sure why he didn't do Band on the Run.    He did not call anyone up on the stage, which was fine with me.   While I like the fact that fans were getting the opportunity to meet Paul, many of the same people were getting called up and some of the fans were getting catty and mean about it.   This way no one has their feelings hurt, but sadly no one gets to meet him.

If you are expecting to hear Paul McCartney sing like he did when he was in his 20's (or 30's or 40's or 50's or even 60's) and will not be happy unless he hits every note perfectly, then the Freshen Up tour isn't for you.    If you like the experience of being with other fans an in the same room as one of the Beatles, the thrill of singing "Hey Jude" with the man that wrote it,  and everything else that comes along with a Paul McCartney show then you won't want to miss it.    My best advice for everyone is to go and take in the entire experience.   Get to the venue early, find the limo watch (if you can),  talk to other fans, buy your merchandise if you want,  get to your seat early enough to enjoy D.J. Chris and ultimately take in the everything Paul McCartney has to offer.   Overlook the bum notes or the flubbed lyrics.   Don't get upset that he didn't sing your favorite song and just enjoy it for what it is:  Paul McCartney in concert.   We don't know how much longer we are going to have this opportunity, so enjoy it while you are there.   Don't jump on social media and complain about it, especially if you chose not to go.   See you next time!