More lost footage has been found!?! 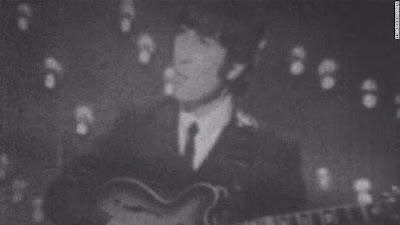 Someone named David Chandler must not have been aware that Apple and a million others have been asking and asking if anyone had any video footage of the Beatles on the BBC in 1966 for the last 30 years.    Well, David, it is better late than never!    He recorded 92 seconds of the Beatles performing "Paperback Writer" on his 8mm hand-cranked camera back in 1966. The footage sat in his attic until the recent discovery of earlier this year of someone else that had a short snippet of this footage. That jogged David's memory and sure enough -- he has footage too.

This is all really exciting! And it makes me once again wonder -- who else is sitting on rare Beatles footage and photographs and has forgotten about it all these years?
Posted by Sara S. at 8:11 PM