The coat of human hair 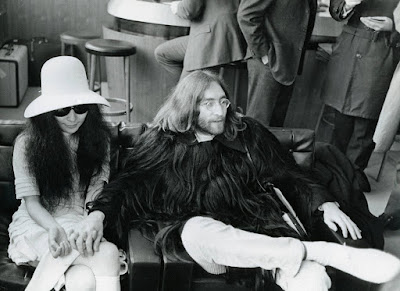 Today, March 20 marks exactly 50 years since John Lennon and Yoko Ono exchanged wedding vows.   We all know the story of their wedding (and if you don't take a listen to the Ballad of John and Yoko because he explains everything in detail there).     I am sure many Beatles sites are posting photos of John and Yoko's wedding.

However -- I can almost guarantee that Meet The Beatles...for Real is the only site to discuss the coat that John Lennon wore on his wedding day.     Now he did not wear it at the ceremony, but he did have it with him.    He wore it when he got off the plane in Paris after the wedding.   This little nugget of information did not make it into the song, but maybe it should have "Finally made our way back to Paris/ I was wearing a coat made of human hair...."

Yes.  John Lennon was wearing a coat made out of human hair and he paid 1,000 pounds for this coat.

Here is what John had to say about the coat with an interview with someone with the last name of "Smith."


Smith:  What I'm leading up to is somebody told me a funny story about your coat, your fur coat.

Yoko:  We didn't kill anybody to get that (laughs).

John:  I've got a coat made out of human hair, which I never wear because it's too heavy and too big.  But I saw it in the paper and thought, "a human hair coat, man, I gotta get it!" (laughs).  So I got it and it's hanging up.

Smith:  They told me -- and I don't know if this is true; as I said it's a fourth received story  -- and it was that you wanted a human-hair coat because you didn't want to have an animal fur coat because you were against the killing of animals.  And they backed it in animal skin.

John:  Yeah because I wanted a fur coat, but I didn't want an animal fur coat.

John:  Well, I don't know.  It was a bit strange (laughs) They were all sort of Asian hair.  It looked like a had tons of Yoko's heads on me, just all this sort of black Asian hair. (laughs)  It was funny seeing.