Starting the New Year off with a "meeting Paul McCartney" story.  This is from a 1981 issue of The McCartney Observer and was written by Christine. 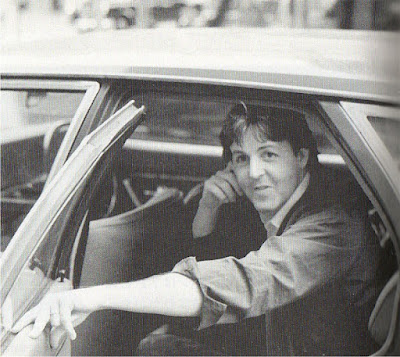 It happened after having loved him and his music for 11 years, and after uncountable times of having tried to meet him but never with any luck.

It was a Friday evening in early July 1981, and although one of the security guards at the studios had told me Paul wouldn't leave before 9pm, I was already there at least 2 hours before.  After an unsuccessful to be able to swallow anything at all -- I found myself leaning against the glass door of the Oxford Street entrance, not really knowing what to do or where to wait....


Knowing my luck in past years, I wasn't holding any hopes anyway, and since John's death, my optimism had suck very low.  So there I was, staring at the traffic, lost in thoughts, believing I still had about two hours to decide what to do or where to wait, when I suddenly felt a vibration in the glass door I was leaning against.  I looked to my left, still daydreaming, and noticed two people coming out of the building.  The person closer to me turned around and threw a quick glance at me...and that face made me wake up from my dreams right away!  It was Paul!   I just stared at him, unable to say anything more move, so he looked away again and left.   Only when he was about 15 feet away from me, I found my voice back and called his name.  He instantly stopped, as if on command, and turned around with a "Yeah?" and a questioning look.  He must have known right away that Iw as waiting there for him and must have expected me to call him back.  The other person stopped and turned around as well, and I realized it was Linda, but I only had eyes for Paul.

They both simply looked at me, waiting for me to say something.  I knew I was expected to say something since I had called Paul, but you know how it is....you have millions of things to tell him, but once he is there,  your mind goes blank and all you manage to do is just look at him.  the only thing I could finally think of in order to "get hold" of him for a minute or two was ask for an autograph, although I hated that question.   Paul nodded and said a slow "s--u--r--e"  and started walking back to me.  Linda told him she'd wait for him in the car, and to this day I don't know why she did that...but I certainly didn't complain about her decision nor call her back.

My first impression of Paul, when he stopped inches in front of me, was that he looked even more beautiful than on photos (and that says a lot!) and that he was thinner and shorter than I had expected him to be.  His hair was cut like in the Beatle days except for his fringe that was a bit shorter, and he was wearing a blue and white striped suit (jacket and trousers) and a very bright, yellow t-shirt.  Nobody could possibly have failed to notice him dressed like that!

He just stood there, looking straight at me, waiting and I simply looked at him, too...until, that is, he suddenly said, "er...do you have a piece of paper or a card or something to write onto?"  I instantly remembered why he was standing there and what he was waiting for, so I told him I had something and kneeled down in order to look for any such thing in my plastic bag on the ground behind me.  While I was digging in my  bag, I observed his feet right next to me from the corner of my eye and I remember thinking, "God, these are Paul's feet, and he's right here now, looking down at me..."

To my relief, I did find a card in my bag.  It was a Wings postcard.  I gave it to him along with one of my hair-raising stupid remarks out of sheer nervousness, "It's you in the picture."  (Oh really?)  Well, I had just wanted to ensure him that he didn't have to sign any strange card because I had heard before that he used to want to know what he was signing.  But it probably sounded more like me trying to explain to him that the guy in the picture was him.

Anyway, he didn't even look at the picture but looked straight at me and gave me a broad smile, and thinking of what I had said, I had to grin as well.  That's when I realized how incredibly calm I was!  I thought he'd sign now, but judged by his look at me, I felt something was wrong.  I understood what the matter was when he asked, "er...and a pen?"  I realized I must have given him the impression of being the worst organized fan ever.  I mumbled, "uhhh..I think so.." and once again kneeled down to dig in my bag.  At the same time Paul was going through all his pockets to look for a pen as well, and to my relief, he suddenly said, 'Oh, it's okay.  I've got one" and pulled out a blue pen from his jacket pocket.  Some luck because I knew I had no pen in my bag!


So he started signing very slowly and I observed his hands as he did so. Suddenly I noticed he stopped writing in the middle of his name, and I looked up.  I observed how his eyes slowly moved upwards from underneath his fringe until they met mine.  I don't know if he was trying to hypnotize me, but he just kept staring into my eyes for a long time, maybe trying to see what my reaction would be and I couldn't help but do just the same.  His eyes were twinkling and he was smiling THE smile.


When he finally looked down again in order to finish writing his name on the card, he started humming a melody and even sang a few words of some unknown song (A new McCartney song maybe?) to me.  Finally, he handed me the card back and I accidentally even wanted to take his pen, but he smiled and put that back into his pocket.  He then apologized for being in a rush and said goodnight and walked away.  But he once again turned around when he was about 15 feet away and waved back at me and shouted, "see you!"

when I walked home to my hotel, later on, it occurred to me just how lucky I had been.  After years of disappointments, bad luck, and failure, I had met Paul all alone in a deserted Oxford Street with nobody else around!

Needless to say that on my way back home I nearly got run over by two cars since I felt like in a trance and didn't notice anything around me anymore, stopped at green lights and crossed the street at red lights.

thinking back on it I realized he could as well have taken no notice of me at all and run to the car.  One "new" fan around, so what?  But he was so nice, so warm and patient and I only felt sorry I couldn't give him back just half as much as he really deserves.