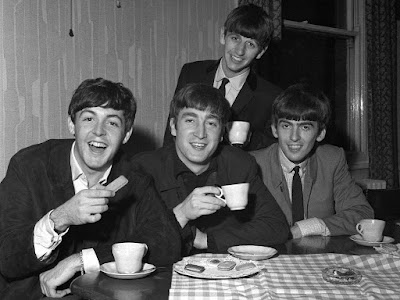 Well Beatle friends, we sure had another exciting Beatles year, didn't we?   The box sets for John Lennon Imagine, the White Album (and from what I hear) Paul McCartney early Wings were outstanding!     Ringo was knighted and is now and forevermore known as "Sir Ringo."    Some of you were able to see Paul in concert and many of us in the U.S. got to see Ringo (and I got to meet him!).    Yellow Submarine was on the big screen and sold out all over the place.  The Beatles were celebrated in Festivals, concert halls, and conventions around the globe.    Thanks to all of us, they remain on top without any decline.

2019 has hopes to be another great Beatle year.   I know that I have tickets to see Paul twice in June!  Ringo has announced another tour as well.   Abbey Road will turn 50 this year and so while nothing official has been announced about it, you and I both know that important anniversary isn't going to pass by unnoticed.

Speaking of important anniversaries:  Meet the Beatles...for Real turns 10 years old in March!   I want to do something special to celebrate this milestone.    I was thinking about having a "party" on Facebook live and giving away prizes and things.   Would any of you be interested in that?

I am getting the notice that I need to renew this site.   Two friendly folks donated this year towards the renewal and a few of you clicked on the Amazon links that I post, but I still need about $12 to keep the site running.   Not that I mind paying the fee, but many, many of you have asked over the years how you can help.     There is a donation button on the "about me" page.    Any money that I make that goes past the amount needed to keep the site going ad-free will go towards buying contest prizes.

I hope you all have a great New Year's Eve and stay safe tonight.

Email ThisBlogThis!Share to TwitterShare to FacebookShare to Pinterest
Labels: It's my blog and I will post what I want to, new years eve, The Beatles