Every night I just pick up another "Beatles Rule!" Fan club newsletter from the stack and see what fan stories I discover.    Here is what I found tonight in the March 1970 issue. 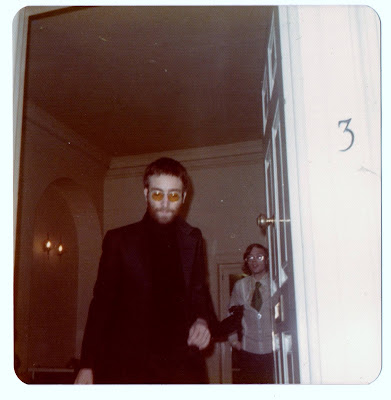 While I was in London I couldn't help but spend most of my time at Apple and Cavendish Avenue.  The first thing I noticed about Apple was that on the basement window was written in felt-tip pen, "Beatles rule!!  December 29, 1969."   So naturally, I would like to know who did this.   It had me guessing ever since!   Outside of Apple were about 20 fans so I joined them.   After a while, through John's office window, we caught a glimpse of him talking on the phone.  Resplendent in his new haircut, he kept smiling at us as Yoko walked around the room apparently looking for something.  But soon they were gone.   We waited for years but they didn't come out.  so, selfishly putting my stomach first, I went to lunch.   When I came back I walked into the Reception Hall and the mess just hit me!  They were redecorating and I couldn't get moving for stepladders, cover sheets, brushes, etc.  When I finally battered my way to the desk and asked if John was in.  "Yeah, but no, you can't see him!"  I asked if I could have some handouts.  "No, they're all locked away because we are redecorating."  Blah Blah Blah!

So I gave up Apple and decided that our man McCartney deserved a visit.   As I turned into Cavendish Avenue I was pleasantly surprised to see about 25 fans (January 31) sat on the wall opposite his house.  I recognized some girls who were at Apple and we stood around talking.  I  hadn't been there five minutes when one of the windows at Number 7 shot open and who else but Mrs. Paul McCartney appeared and shouted, no, screamed..."Go away won't you?  He's my Paul now, not your Paul.  Go away!"  We all stood around in amazement, then a few less lady-like ones in the bunch gave few comments, not unlike those heard last summer.   But our patience was rewarded, for about an hour later, the curtains parted and Paul peered through the window, smiled, waved and disappeared.   There wasn't even time to lift camera to eye but it satisfied most of the girls.   I later read in the musical papers it was around that time Paul was working on some new songs.   Apple released a statement in February that Paul is to issue a solo LP of his own compositions in mid-March or early April.     It will be shortly after the release of the Get Back album in Britain.
Posted by Sara S. at 10:50 PM