Another story tonight from the October 1979 issue of With a Little Help  From My Friends.  This Paul story was written by Angela Rennie. 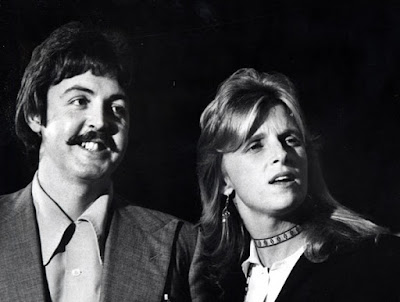 The day was October the 21st 1976.  My two friends and I had come down to London to see Paul and the Wings last of the Wembley concerts.  My friends being Caroline and Moira (Moria's a Paul fan, Caroline's a Lennonite, I'm a George fan).  Anyhow, we'd made our way to Victoria tube station after meeting Moria.  Of course, like any true Beatle or Wings fan we were covered in badges and as any true Scot, had tartan scarves on.

Anyhow, we were just discussing the fact that none of us had any change for the tube which we were using to get to St. John's Wood, when this girl came up to us and said, "Are you going to see Paul McCartney?" We, of course, answered "yeah!"  We got to talking to her and told her where we were going, so she decided to tag along.  We met her friend, Keither (who is a McCartney fan).  We decided to go to the Dark Horse first.   We finally found it, and the guy gave us stickers and things, and lovely postcards of George.  But he said, "No McCartney fans allowed in here"  (he was joking...I think???)   So Moria and Keith refused to go in but the rest of us did, and God!   What a feeling standing on the same carpet that George had.  But since this is meant to be about seeing Paul, I better not go into that.  We got a tube to St. John's Wood.  We walked past the synagogue and took pics of it, then onto the famed crossing -- God knows how many times we walked across it.  Keith cracked us up -- he was walking across in his bare feet and it was pouring rain.  This old woman thought we were all mad.   After Keith got his shoes and socks back on we went to EMI.   We took some pics and went on to a very holy place in the religion that we all practice.   When we reached Paul's house, there were about for fellows there (English ones).  They were standing all very quiet, then we came and disrupted everything.

First up the wall was Keith.  He was shouting down all the car registrations, makes and colours, then he gave me a leg up.  so there I was dangling on the wall when who should come to the window -- yeah, the great man -- so, of course, I automatically fell off the wall amidst a shout of "Paul!"  I didn't have the nerve to go back up in case I saw him again.   After about two hours I think, Denny arrives, signs a few autographs, gets back in his car and drives through the gates.  There were a lot of people going in and out all the time.  Wilma spoke to Linda on the speaker as she'd seen them in New York, so they talked about that, and Linda sent out a pic for Wilma.   Then the kids arrived.  The poor driver had a long wait as Jimmy and Joe still hadn't arrived.  We spoke to the driver and I offered to help drive the Rolls or help pack Paul in, but he said he was sure we could manage.   Then down the road comes a car driven by Jimmy's brother.  Jimmy gets out and we go to them.  Keith had met him before, so they talked for a bit and got their pics taken with arms around each other.   He signed for us, and when he signed Caroline's, which was the last "Beatles Monthly,"  he wrote over Goerge's face.   I'd been saying all day nobody better write over George, so when Jimmy did, Caroline said, "You shouldn't have done that."  Then I said, "What did you write on him for?"  And he laughed and said,  "Well he was the lead guitarist wasn't he?"   I just gave him a funny look.   While we'd been talking to Jimmy, Joe had walked in.  Now when we watched Jimmy go in, we just about died -- there standing at the bottom window waving was Paul-- but there's one other fact that all you severe McCartney fans will love.  He'd just had a bath (his hair was wet) and he was standing with just a dressing gown on.  I bet we looked a right sight jumping up and down, but then they shut the gates.  I turned to Moria and said, "did you see him, did you see him?"  And she said, "No."  I felt really rotten seeing as he was her favorite and she'd waited 13 years to get this close.  Sill, I told her he's got to come out and you'll see him and touch him.   Not long after that, Heather came down the road and we said, "Hi Heather."  The look she gave us was like we were dirt. She just opened the gates and went in.  And here's us used to feeling sorry for her as she usually looks so miserable in pics.   And she'd given us a dirty look.

Then out came the group.  Jimmy had Linda' new book and said, "Bet you haven't gotten this yet" and I said, "How much is it?"  He said "seven pound."  I said, "Then that's why I haven't got it."  Then the doors opened again and out came Paul and Linda.   Everybody rushed over to them.  By this time there were a few more people who had just come.  We waited at the Rolls' door and when Paul reached it I said, "Hi Paul."  He said hi and got in.  I  had my hand with the book on Wings stuck in the Rolls in the front of Paul.  I couldn't move as everyone had wedged in.  Caroline gave him here (the last Beatles Monthly) and he gave a look.  She said "sorry" and he smiled.   The Rolls started moving with me along with it so I said, "Just scribble on it," but he wrote "Paul"  I could've died on the spot except I had a 4th row ticket to see him that night plus the fact I still haven't seen George, so...  As he was going he blew kisses.  He was really lovely.   After he'd gone I said to Moria, "did you get his autograph?" but Moria was pure white and could hardly talk.  She just nodded no.  I felt worse she'd waited that long.  She said, "I've seen him that close...


She said to me, "I saw him sign that," pointing to my book.  I really felt bad; so did the rest of us.  I said, "do you want mine and give me your book?"   She said "no."  We walked to the top of the road.  Wilma took a film of the Cavendish Avenue sign.  She also had taken one of Paul coming out of the gate.  We were nearly killed crossing the road, but we didn't care.  We 'd just seen a Beatle and that's all that mattered.