The Mersey Beatles - A Concert review 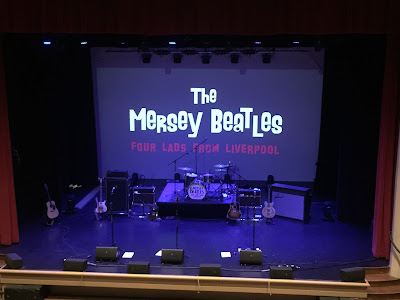 On October 11, 2018, my mom took me to The Wildey Theater in Edwardsville, Illinois for my birthday to see a concert by the Mersey Beatles.

As I have said before, I am not crazy about Beatles tribute bands.   I can appreciate the music if it is done correctly, but I just can't get into the whole looking and acting like the Beatles thing.    But I was willing to give the Mersey Beatles a chance because they are from Liverpool.   That way I knew that the at least the accents wouldn't be fake.

The Mersey Beatles really were very good.   While they did dress in Beatles costumes, they did not try to pretend that they were the Beatles.  They did a great job honoring the music and memory of the Beatles.

The first half of their set was all 1968 stuff.   They came out dressed in the clothing the Beatles wore on the Mad Day Out photo shoot -- and the customs for this were really cool.   I especially liked "George's" outfit.    They sang many songs from the White Album.  I especially thought "Dear Prudence" was outstanding.    I actually found that I was enjoying the songs by John and George more than the ones by Paul.   I think that might be because I have heard the real Paul perform many of the songs in concert, but I will never hear John sing any of his songs.     They also did a great version of "Hey Bulldog." 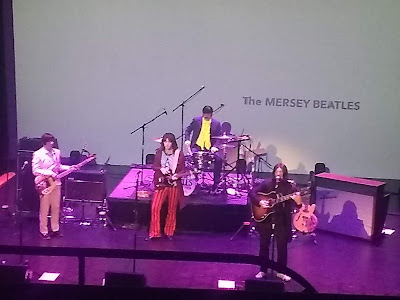 The second half of the show was the "early Beatles" years.   There was a lot of upbeat dance songs from the Beatles early days.    They also did some songs from Rubber Soul and Revolver.   From this set, I think "If I needed someone" was my favorite (although the singer messed up by coming in at the wrong time.   He really should have pulled a George move and wave to the crowd -- I mean if you are going to play the part -- then go all out).      However, their version of "This Boy" was off and did not have that tight Beatle harmony that we all love.    The guy that does the "Paul" role is right-handed.  This didn't bother me during the 1968 set, but it did in the early years.   Something about the look of Paul and George coming together with mirrored guitars is such a part of the Beatles look from that time.  When it looks different, it just feels really wrong to the eye. 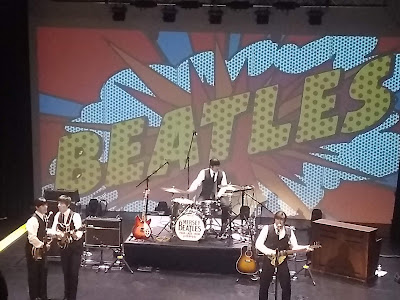 I really liked the use of the background projections.   They would often project things that looked like familiar backgrounds from say the Ed Sullivan Show or Big Night Out.    They also showed some clips and photographs that really made the song even more fun. 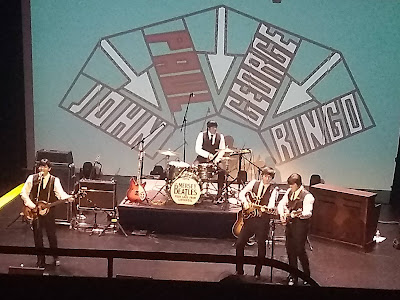 Overall I enjoyed the Mersey Beatles.   It was a fun way to celebrate my birthday.    And while I am still not sold on tribute bands, I would go see this one again if I had the opportunity.