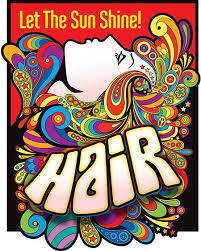 Last night I saw the musical "Hair" at a local theater.    "Hair" has always been one of my favorite musicals.  I love the story, the characters and mostly the music.   Since seeing it last night, my mind has been on the play and I have been listening to the soundtrack today and reading articles and things about the original productions in 1968-1970.

While I was reminding myself with the history of "Hair," I started to realize that much of what they were doing on stage 50 years ago lined right up with the things that John and Yoko were doing around the same time.    For example --   "Hair" is known for the "nude scene" that ends Act I.    (I have seen this play a few times and the nude scene is so fast that you go ---that was it?).   Nudity was not seen on stage at the time (really it STILL isn't common) and there were productions where the cast was arrested for indecency.     The reason behind the nude scene is to prove the point that in America, it is worse to show the nude body than to show shooting and killing in Vietnam on the nightly news.    It was to symbolize freedom.  Similarly, John and Yoko being naked on the cover of Two Virgins also showed freedom and how people react so shockingly to a nude body but don't bat an eye to the carnage in war.

So I just knew that John had to have liked "Hair."   He went to the theater.   He was part of "Oh Calcutta" which was pretty shocking.   Boy was I wrong!!

I found a story where Yoko states that John only ever went to see one musical and it was "Hair."  He disliked it so much that he left before it was over.     In July 1969, Gene Lees wrote in High Fidelity that John Lennon found the musical to be "dull."


Hair opened in London on September 27, 1968, and closed in July of 1973 after 1,997 shows.   Some of the show was changed a bit from Broadway so that some of the things would make more sense to a British audience.     I don't know when John went to see it.      Too bad that John didn't give the musical another chance.   Maybe a few years later, he would have realized that they were striving to promote peace, just like him.