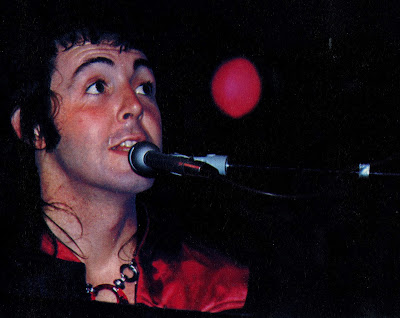 
Paul and Linda McCartney have always  been a devoted couple, but when Paul ended up in court in an attempt to settle the troubles the Beatles had faced, they were brought even closer together. "We were alone a lot at that time,"  Linda explains.  "And Paul was so miserable because he had nobody to play music with.  so he taught me chords and then tunes.  I'd learned to play piano when I was a kid, but I hated it.  But after Paul and I were married we used to sing together around the house.  He was so brilliant it all seemed so easy.   Then he asked me to be in Wings."

and that brought Paul and Linda more knocks.   It's no use pretending that it didn't bother them, but their own great relationship kept them going through the troubles.  "I don't really mind the knocking now,"  Paul says.  "In fact, I'm rather used to it.  Yes, it did upset me, but not now."

"When I do is just play in a band with some friends, sit at a piano and play some songs, and that's it.  If people want to criticise me for that, let them go ahead --  it won't get to me."

Everyone said when the Beatles broke up that none of the four would ever be as good on their own, as they were together.  But they've been proved wrong!  Especially so by Paul, because he's the only ex-Beatle to be back on the group with a group.

"I think the audiences are going for us now, not because I'm Paul McCartney, but because we are Wings,"  he says.  "I used to worry that they'd be wanting the Beatles, but not now.  I thought, if that's what they want, they can play the old records.  We're Wings and that's it!.  Okay, so we're not as famous as the Beatles were when they were strong, but so what?  It took the Beatles three hard years to start getting anywhere at all -- we've been going two years and we've done this much already.  I'm happy." 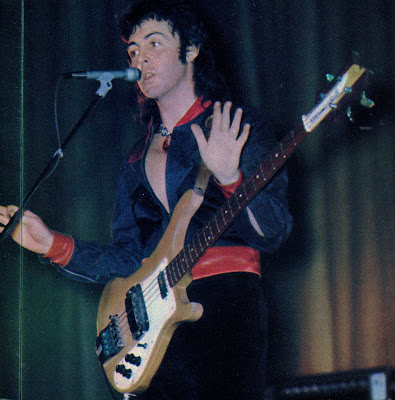 Paul certainly looks happy, and more confident than perhaps even he could have imagined two years ago.   No doubt one of the things that makes him glad is that he is working again, and for that we have to thank Linda.  She talked him out of the sadness and depression which followed the bitter fight with the other three.  Paul dismisses any talk of a Beatles' reunion -- the only way they would work together in the future, he says, is perhaps on each other's records.  and they actually all worked on Ringo's latest LP.

"But it's just daft, really silly, to talk about us all getting back together for anything more than that.  The Beatles happened years ago, and we've grown up in four different ways.   We're all into different things now.  We've grown away from each other musically, though we obviously have some links still.  I couldn't say that I miss them all madly and can't wait to get back together again and go touring, but it'd be daft.  And lies." 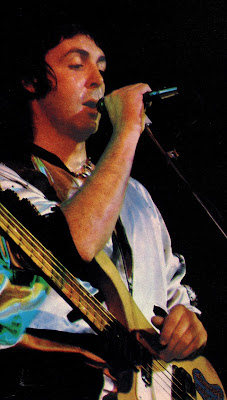 "I''m in a brand new band now, a good band, and we're recording and touring, and it's what I want.  I don't know what's going to happen with Wings, how big we might become, but at least give us a chance ... let's just see what happens."

And Paul knows that lots of his fans now don't remember the Beatles -- and really he's glad about that.

"Our daughter, Heather only barely knows who the Beatles were, but so what?"  he says.  "She loves the Osmonds.  And I think the Osmonds and David Cassidy are nice too.  I like them for what they are.  They're slick, very professional, and they just get on with their job. 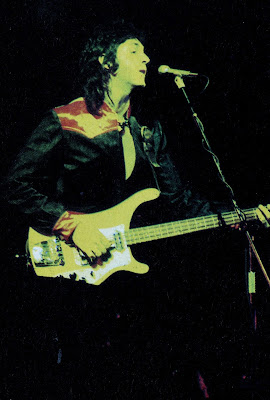 "If music's good, it's good, and there's no reason o take it all apart and put all kind of deep, intellectual meanings into it.  I think it's wrong to analylse music like that, it just doesn't need it.  There are more important things in life to take seriously."

And what happens to Wings now?  Paul wants to do a tour of America and another of Europe, and about September they should have an LP out.

"Beyond that I don't know.  We just don't make plans that far ahead."  Paul admits.  "If  I said 'I want to be doing this and this in two years' time,'  I'd  be playing around with four other people's lives.  And I don't want to do that.  Usually I just plan the next week and if everything works out then I'm happy."

And Paul makes us all so happy too, that we can't really argue with that.
Posted by Sara S. at 4:27 PM