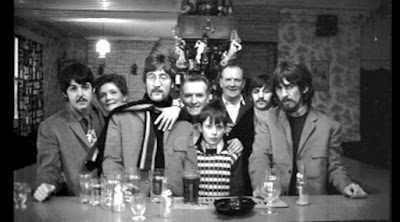 This weekend this amazing photo of the Beatles in a pub taken while they were making the promo for "Penny Lane" was posted on the Lennon Years Facebook page.

It was originally shared during a talk Mark Lewisohn gave in Iceland and he verifies that it is indeed a real photograph and not a "fake"  (as so many people today like to jump in and claim).


Here is also what was posted on the page about the photo:

The cast, crew and The Beatles were based at the Salway Arms pub for the day when they weren't filming. Work was delayed by the late arrival of the red hunting jackets worn by the group; eventually a newspaper distributor named Ernie Smith drove to Commercial Road in Stepney to collect them."


I love these stories where one of the Beatles (or in this case all four of them) go somewhere "nomal" such as a pub and mix with the regular people.
Posted by Sara S. at 3:25 PM