This has been a discussion going on between some of the great minds in Beatleology-- alright just a group of us on Facebook talking about it.    I said that I would post it out on this blog and see what everyone else thinks. 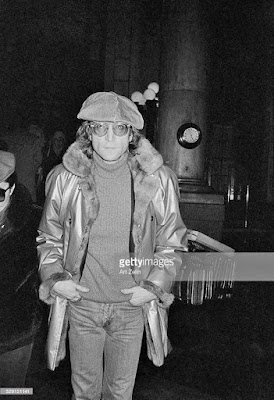 This is the John Lennon photo in question.  We are trying to figure out when and where it was taken.  John wore this jacket and shirt a lot during November of 1980.        In lightening the photo, we can make out some of the things in the background.    We spot a clock that is at 4:00, a pillar, some luggage and what seems to be a luggage cart.

So it would seem that John and Yoko were outside of a hotel in New York City.     We know that Ringo and John (along with Barbara and Yoko) met at the Plaza Hotel on November 15 (or was it the 26th?  Ringo says on the Barbara Walters special that it was on November 15.   Other sources say it was November 26.    I personally am going to go with Ringo's date on this one, even though Ringo is typically the worst person to trust on dates simply because you don't forget the last day you saw your best friend.).

So the mystery question is:   Could the John photo have been taken on the same day that he last saw Ringo?

It appears to me that John IS at the Plaza in the photo.    When I look at a modern photo of the Plaza, I see the round clock on a pillar.  The clocks don't seem to match, but I don't know of any other hotel in NYC with clocks like that in the front.    Also, the marble on the building appears to match one another on both photos.

Is there another time when John and Yoko were at the Plaza in November of 1980?

What do you think my fellow Beatle fans?
Posted by Sara S. at 7:58 PM