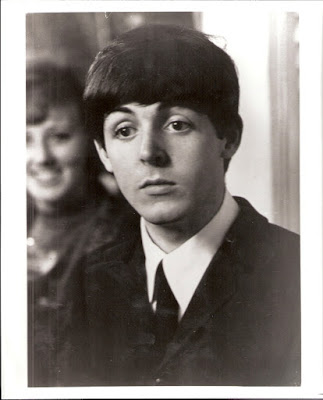 Dave:  Are you plannign on entering Drakes Drum in the races in the United States?

Paul:   Oh, I see.  It's nothing to dow ith me, you know.  It's my dad's horse and I didn't buy it for myself.  I bought it as a birthday present for him.  So if he fancies entering, you know, let him.  He's doing okay though, won last time, I know.

Dave:  And he came in second on the first time out?

Dave:  You're in no way concerned with Darakes Drum at all?

Dave:  Do you really?

Dave:  Doy ou have a -- what about your favorite part in "A Hard Day's Night"?  Which one was it, can you recall?

Paul:  My favorite bit of it, um, the field.

Dave:  Very good.  That's my favorite, too.   What about any of the other parts?  Can you think of any?

Paul:  Ringo's bit was the bit I liked as well.  The field best.  Then all Ringo's stuff, and, you know, with them playing "Ringo's Theme" over it, "This Boy."

Dave:  Yeah, by the way, whydid they coose "This Boy" to be Ringo's theme?  Was it his favorite, Paul?

Dave:  Nice seeing you.  I'd like to ask you a few questions, if I may, conserning Jane Asher.  Are you engaged to her in any way?

Paul:  Nothing, no.  She's just my girlfiend.  Not engaged, not married, not divorced -- nothing, you know.

Dave:  But what about  --- It's been rumored that you were residing at the Wimpole address with the Asher family.  Is that correct?

Paul:   There's so many rumors that reach America--you know, about us, wich are completely untrue.  That's another of them.  She's just my girlfriend, you know.  And I take her out when we are in London.  That's all there is to it, really.

Dave:  What about your next picture? Is there going to be a part made for Jane Asher in it?