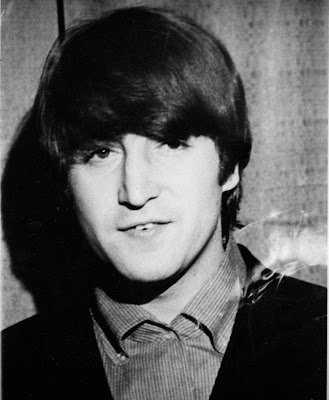 Dave:  Was it Ringo that made it up?

John:  Yeah.  He said it accidentally.

Dave:  He did?  What about In His Own Write?     Which one of the stories is your favorite?

John:  Well, they're earlier, you know.  Ones like that.

Dave:  Do you consider yourself a little twisted?

Dave:  Not really.  Well, I want to thank you very much for talking with me.

Dave:  I've a couple of other things, too, considering you and your wife.  I asked you this one before, when you were here that time.  Is your wife expecting?

John:  No she isn't!  They keep writing about it in these damn fool magazines.  Damn fool I say, and I repeat it.

Dave:  There's a rumor that you're leaving the Beatles.  Is that true?

Dave:  What is your favorite part in "A Hard Day's Night"?

John:  The bit in the field.

Dave:  Mine too.  But what abotu the bathtub?

John:  Oh yeah.  I don't mind that, but I prefer the bit in the field.

Dave:  Is it true some of the stuff was spontaneous, John?

John:  All of it in the bathtub was.  The idea wasn't.  They jsut run it, and I just had to do whatever It hougth of in the bathtub.

Dave:  What about the other fellows?  Did they do things too, that were spontaneous?

John:  Yes, quite a lot of it was spontaneous.  Only you can't really, because you got to do so many takes.   Even if, say the four of us are there, and one of us things of a gag, ad-lib, just throw it in, and there's something in the background goes wrong, so you go to do it over again.  So they're not ad-lib then.  there's still quite a lot to this bit, but you know, some of the gags are us, or the director, you know.  He threw quite a bit in, too.

Dave:  John, may I ask you -- it's been rumored that the next film -- that you are preparing to write now -- have you started the next film?

John:  No, I'm not writing it at all.  You know, it was just started because I had a book.  A short story at home which I thought would make a good film, if it was re-written, and that's how it got round that I was going to write it, you know.  But I haven't got time.  I don't even think I could, anyway.

Dave:  Well, it's been rumored that it's going to be filmed in Hollywood.  Can you tell whether it is, or isn't?

John:  No.  It's definately not being filmed in Hollywood.  It'll be done in England.  It's cheapter, and you know, it saves us from going away from home, as well.

Dave:  John, tell me if you've yet moved into your home in Surrey?

John:   No, I haven't had time.   The place is empty.  There' s no furniture.  Needs decorating, and walls knocking down.  The thing's nowhere near ready.  It'll be next eyar, probably.

Dave:  they said you've moved to Emperor's Gate.  Are you moving out of there into the Surrey home?  Is that it?

John:   I've moved from Empoeror's Gate, but not into the house, you see.