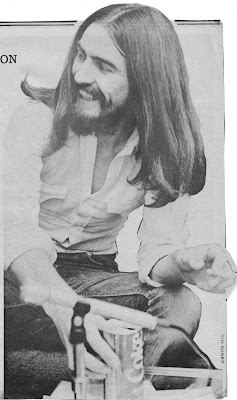 George Harrison sat in with Dylan at Columbia Studio B recently (early May) and during twelve hours of recording they laid down some oldies, some Beatles number and a number of new Dylan compositions, some of which were described as very beautiful love songs.  Bob Johnson's production was said to consist of him shouting "go!" every time it looked like Dylan was going to play something.  The engineer would then turn on the tape.

It was a loose session:  Russ Kunkel, who had flown in from L.A. to play drums, had never met Dylan or George before and wasn't familiar with the new numbers.  On one track he just blocked in behind Dylan, thinking it was a run through.  When they finished he was surprised when Dylan accepted the take as a master.  Another instance came when George thought aht one of Dylan's new numbers deserved a production job done on it and that they should work on it some.   After the first take Dylan asked, "Was it that rough?"  On being told that it wasn't that bed he decided to leave it at the first take.   If George can't persuade Dylan to work on his material then nobody can...So most of the tracks are first take only for that down-home, just-us-guys-hangin'-out-together sound.

The fate of these fabled tracks is unclear.  Presumably masterminds Al Grossman and Alan Klein will have to meet at last and work something out -- another historic meeting.  George fits in well with other groups:  his work with Delaney and Bonnie when they toured England, his track on Goodbye Cream, his productions and bass playing with the Apple artists, particularly Jackie Lomax, suggest that maybe he was being held back by the Beatles as well as john (who graduated to heavy rock), Ringo (who moved on to hollywood showbiz), Paul (stay at home musical genius).

so far we haven't heard a solo album by George, his Electronic Music being his early experiments with a newly acquired Moog, and Wonderwalls being written for the movie.  A George solo album will be well worth waiting for, as well as completing the gap left by the other three Beatles solo albums.

George's direction, that of soul/gospel oriented, Indian sounding rock is unique and, if he has contributed musically to Dylan rather than jammed with him will provide us with a strange new combination;   country raga.  Far out eh?